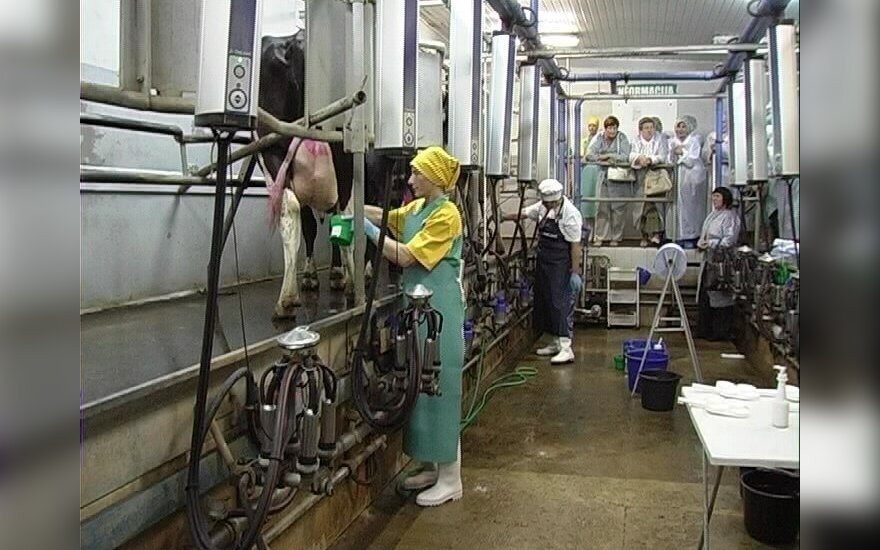 Lithuanian farmers, same as Latvian ones, would like to employ Ukrainians and Belarussians due to the lack of labour willing to work for a minimum wage. Head of the Seimas Rural Affairs Committee, "Farmer" Andriejus Stančikas tells LRT that this question has been discussed with Prime Minister Saulius Skvernelis and in the next Seimas session a decision should be made on the simplification of these citizens' employment.

LRT Radio correspondent in Riga, Arūnas Vaikutis reports that Latvian farmers wish to accept third country citizens, more and more of whom are reaching Latvia as of recently. Mostly these are Belarussians, Ukrainians, even Uzbeks and most of them are willing to work in the countryside for a minimum wage.

The Latvian Farmers Parliament [industry association/trade union for farmers in Latvia] state they are experiencing an increasing lack of unqualified labour. Locals are unwilling to work for minimum wage, furthermore many working age individuals have already left abroad.

Unqualified labour was particularly lacking after the rainfall experienced last year. With sufficient staff it would have been possible to save at least a third of the crop.

However as farmer representatives in Latvia told LRT Radio, if you wish to legally employ such those individuals, in Latvia a great number of formalities need to be resolved which can take up to half a year. What to do then if the farmer needs workers immediately?

The Farmers Parliament is requesting the Latvian Government to allow all workforce related formalities for individuals from third countries to be resolved over a few weeks. So far the Latvian government has not reacted to this request, thus a part of third country citizens arriving to work in Latvia do so illegally.

What is the situation in this regard in Lithuania and do our country's farmers lack workers from third countries?

The chairman of the Lithuanian Farmers Union Jonas Talmantas accents that the country's farms lack both qualified and unqualified labour, similarly to Latvia.

"When I spoke a year ago [about the lack of labour force], the situation was more normal, while now we are lacking both unqualified and qualified labour. We do not have land ameliorators – only retirement aged staff. Amelioration companies are being founded, but we do not have leaders and specialists who could work. We do not have good tractor drivers, plasterers, concrete layers. We have practically nothing because no-one trains them anymore. We are also lacking gardeners, grain cultivators and others," J. Talmantas told LRT.lt.

According to the chairman, the Lithuanian Farmers Union will include this question into its presidium agenda on January 19. "There really are problems. The construction sector can [attract foreigners to work easier], while agriculture, the countryside does not have any permits, we cannot make use of it, but really it would appear to be necessary. Looking from the other side, the unemployment percentage is not low, but there are none who wish to work or those people are completely under the influence of alcohol and they are no longer suited for the labour market. Meanwhile others have practically no skills or health to work – just wait for their benefits payments and sunset," J. Talmantas continued.

Citizens of other countries such as Belarus or Ukraine, the chairman points out, are content with Lithuanian wages. "And if they are qualified specialists they can certainly work not for the minimum, but for normal wages. Thus it could be done that they could come here because there's no other way. Our qualified specialists depart to EU and other countries, so why can't we fill the niche with foreign citizens?" he questioned.

Discussed the situation with the prime minister

Seimas Rural Affairs Committee chairman, "Farmer" A. Stančikas confirmed that the labour situation in the country's agricultural sector truly is not good, thus it would be possible to accept citizens of third countries.

"I was in a meeting of the prime minister and the Lithuanian Dairy Producers Association just recently. One of the questions raised was of labour force, particularly in mind neighbouring countries – Belarus, accenting Ukraine because today we see workers coming from Ukraine, but they come in an odd way – companies are registered in Poland, they work in Lithuania and the staff is Ukrainian. Whatever it may be, there is a lack of labour in both industry and agriculture.

Most of our youth left abroad to seek better living. What can you do – it is what it is. Nothing magical occurred – in other countries such as Spain the youth also emigrated to other countries in search of better livelihoods and their places in the labour market were filled by Poles, Lithuanians. I see no problem regarding Ukrainians or Belarussians," A. Stančikas told LRT.lt.

According to the Rural Affairs Committee chairman, the country's businessmen may have irrevocably lost labour force by paying low wages in efforts to save money or compete on the market. "Today we can count at least two generations of those who left abroad and set roots. A large number will unlikely return to Lithuania because they have built families, have a home and such," the politician explained.

According to him, employment procedures were also discussed with S. Skvernelis – there will be efforts to shorten and simplify them. "We are like doing things at length so that everyone would have work, but there is no benefit from that. The procedures must be clear and brief," A. Stančikas assured.

He states that because the procedures are fairly long and complex, today the agricultural sector sees little labour from neighbouring countries. "But there is demand, the farmers themselves speak of it. I believe that it is a question of time [until more foreigners are employed]. I believe we will certainly take this up in the spring session. Perhaps the Rural Affairs Committee will also gather in between sessions and will discuss what legislation needs adjusting to reduce delays [in employment]," A. Stančikas told LRT.lt.

The politician expressed concern that many will claim that this way local labour will be lost, however in certain regions of the country business is being established, foreign companies are expanding and there is a vast lack of labour.

"Today qualified specialists are greatly needed, but there are none. And one of the sources is neighbouring countries. The PM supports this and accents that if there is such a demand, we must seek ways to implement it faster," A. Stančikas told LRT.lt.

Migration procedures for foreigners coming to Lithuania to work have been simplified, while companies...

Unlawful labor makes a rather significant share of shadow economy in Lithuania, and the indicator is...