Vaidas Saldžiūnas
Parašyti
autoriui
aA
Lithuanian and foreign military analysts have been looking into hypothetical scenarios of a hybrid war breaking out in the Baltics for some time now - most of them envisage an attack from Russia, forgetting or simply ignoring the possibility of such an attack coming from Belarus. 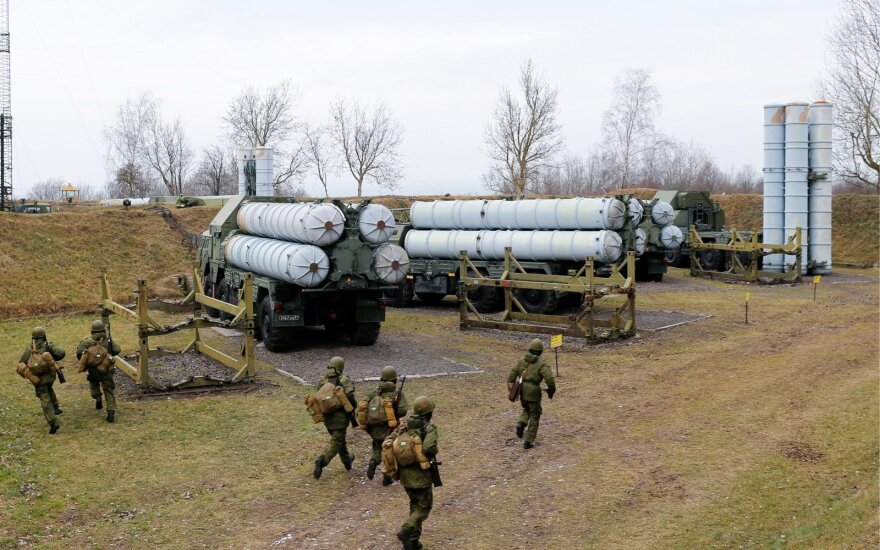 The authoritarian country, lying just 30 kilometres east of Lithuania's capital Vilnius, has been the closest ally of Vladimir Putin's Russia and shares a 677-kilometre border with Lithuania.

When it comes to military threats, few Lithuanian politicians point to Belarus as a danger. Instead they note that Alexander Lukashenko, the country's ruler who has had his grip on Belarus for over two decades, has been posturing in front of Moscow, insisting that Minsk would not be bossed around.

However, Belarus is Russia's closest ally, deeply linked to it through economic, political and military ties.

Is neutrality a bluff?

Lukashenko is eager to maintain the image of his country as a neutral bridge between East and West. It is not accidental that the Ukraine truce talks involving the Kiev government and separatists and Russian and European leaders in 2014 were held in Minsk, with Lukashenko revelling in his role as host and peacemaker.

"Don't be deceived. Not for a moment must we forget that Belarus poses the same potential military threat to us as Russia. In terms of the military, the two countries are 100% alike," a defence policy-making source told DELFI.

In Lithuania, however, there is no unambiguous position on what to make of Belarus. On the one hand, Minsk held back its support for Russia when it attacked Georgia and has not recognized the Moscow-supported breakaway republics of Abhasia and South Ossetia.

Moreover, when the conflict in Ukraine broke out, Lukasheno emphasised his neutrality and even made a show of beefing up the training of his army, the message being that Belarus would not allow a repeat of the Ukraine scenario on its soil.

On the other hand, however, Lithuania's attempts to find common ground with Belarus - like during talks in Minsk and Vilnius in 2009-2010 – have produced little results.

Lithuanian diplomats insist that Vilnius knows the difference between Russia and Belarus. The Belarusian Embassy often receives invitations to Lithunanian state events that do not, for one reason or another, include the Russian ambassador. The point does not escape either Moscow or Minsk's attention.

However, Lithuania's apparent reluctance to regard Belarus as a military threat - insisting that Lukashenko would not want to get into a conflict with NATO - might be misguided, since Lukashenko's dependence on Moscow grows every year.

Meanwhile Moscow, hard-pressed by low oil prices and resultant economic woes, is not above pressuring not just its adversaries, but its allies as well, including Belarus.

Belarus' neutrality is even more dubious in view of its membership of the Collective Security Treaty Organization. With its commitments to collective defence, the body is a version of NATO for the Commonwealth of Independent States (CIS). Moscow obviously holds the deciding vote in the organization and regards it as a card to be played in the event of a military conflict.

Belarus has a special role in Russia's military strategy. The military alliance between Moscow and Minsk is so advanced that Belarusian armed forces must be included into any calculations of potential threats, say analysts.

Lithuania's armed forces pale in comparison to the size of Belarus' army. The country of 9.6 million has some 48,000 servicemen, about four times more than Lithuania.

The backbone of the Belarusian army are three mechanised brigades of between 3,000 and 5,000 men each. The 11th brigade is stationed in Slonim, the 120th brigade is in Minsk and the 6th, the most dangerous one, in Gardin.

Each brigade has T-72 tanks (up to 300 in total, in addition to about 1,500 more not in use) and about 1,000 armoured vehicles, mostly old Soviet-make BMPs. Three more incomplete brigades could be mobilized at short notice.

Belarus' mixed army (60% professional and 40% draftees) can also be supplemented with reserve forces. Over the last number of years, Belarus has conducted extensive reserve training to reach Lukashenko’s goal of having up to 120,000 trained soldiers in reserve.

"For a country of its size, Belarus has a massive army," said analyst Audrius Bačiulis. He added be believed that Belarusians were good soldiers, perhaps even better than Russians, although not as well-equipped.

The two armies regularly hold exercises in the Gozh Polygon, near Grodno, near the Lithuanian and Polish borders. From there, Belarusian tanks could reach the Lithuanian border near Druskininkai in 30 minutes. In cooperation with Russian forces approaching from Kaliningrad, the 6th Belarusian brigade would easily cut off the Suvalki Corridor. That this area, a crucial route for any backup from Poland, could become a hotspot has been hinted at by both senior NATO officials and military analysts.

There is good reason to believe Lukashenko would not risk an attack on a NATO member for fear of a response from Poland and the United States.

"Belarus does not feel under military threat, even though NATO activity in neighbouring countries does raise some concern. Without domestic political or social destabilising factors, a military conflict would be unlikely," Alexander Myazhuyev, chairman of the National Security Committee at the Belarusian parliament, said in 2013.

However, Minsk could be left with little option, as Moscow knows all too well how to pressure its neighbour into submission. One of the weakest points of the Belarusian armed forces is its anti-aircraft defences and its air force. These parts of the army are particularly neglected and dependent on Russia's support.

In February 2012, Belarus and Russia signed an agreement - which they ratified a year later - on building a regional air defence system. It means that the airspace above both countries is monitored and defended through a joint effort.

The fact that Russia's and Belarus' air defence systems are integrated means that there is little difference between whose system is whose and, in the case of a conflict, it would be difficult, and indeed pointless, to look for the difference.

Finally, hundreds of Russian soldiers are deployed on Belarusian soil. Vileika, a town some 120km from Vilnius, hosts the 43rd Russian Navy communications centre staffed with 350 army officers. The centre has the capability to communicate orders to Russian submarines loaded with nuclear warheads out at sea.

Since 2002, Russia has stationed its radars monitoring ballistic missiles in Hantsavichy, in the south of Belarus. Experts estimate the centre is staffed with up to 2,000 soldiers.

It is also noteworthy that the most powerful divisions of the Belarusian army are stationed along the border with Poland and Lithuania, and that that force dwarfs the Baltic States’ armies.

If Russia did decide to take military action against the Baltic States, Belarus would hardly have the option of staying neutral, if only for the fact that the Russian forces stationed on its soil would formally become NATO targets in any conflict.

Latvia will back Lithuania in opposing the construction of a nuclear power plant some 50 kilometres...

Concepts of military strategy and doctrine have long influenced the political and military geography...