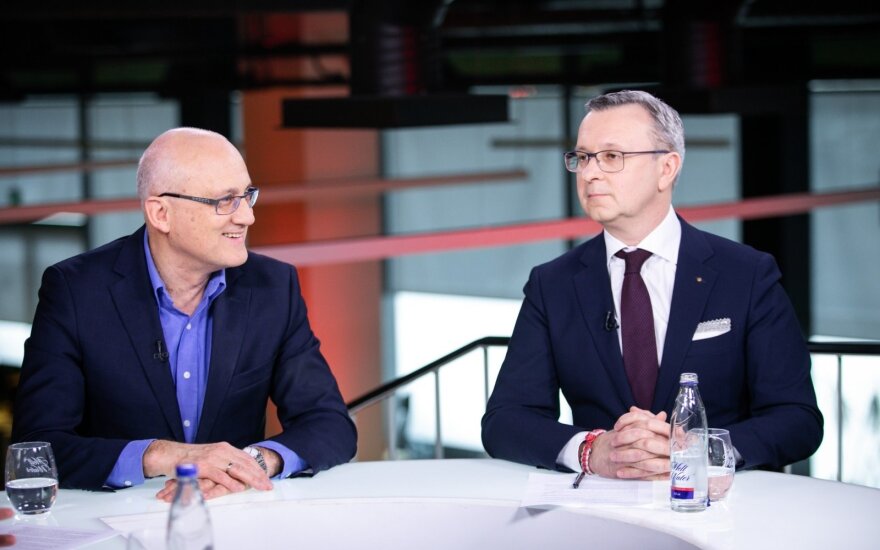 According to M. Zalatorius, the past year was excellent for the banking sector.

"Bank profitability is a direct example of our economy. It is said that if things are good for clients, it will be good for the bank. If clients do poorly, so do banks. This direct link definitely exists. The past year was excellent for the banking sector," Mantas Zalatorius said on the show, urging to not fear profitable banks because risks only arise when the banks earn far too little.

"First of all, it must be said that you should not fear profitable banks. You should fear banks either not earning profits or earning far too little. Whether the situation is stable, depends on what you look at. If you look at capital returns, it is at 13%. This is decent, the situation is sufficiently stable. So far, we had profit growth, which shows that the economy is growing, however no one can currently say at what point in the economic cycle we are," the Bank Association president said.

S. Jakeliūnas found this sort of image to be warped.

"If depositors are bank clients and one could think you can say so, then the profits are built at the cost of those depositors. Inflation is at 2-3%, so I would not say that everything is all that fair and stable. The massive sums of money imitated by the banks themselves, there is much money, but it is at the cost of cheap money that banks earn these profits. If interest rates begin rising, which will eventually happen, the situation will change, but interest on loans will rise, thus I would say that the situation is risky and there are various threats. It is abnormal that nearly no interest is paid for deposits. Debtors are living at the expense of those saving," the chairman of the Seimas Budget and Finance Committee said.

According to M. Zalatorius, it could be that in the future interest rates will rise and the situation will change, however currently borrowing is cheaper than ever.

"The reality is that the inter-bank loan norm is set by the market. On one hand, negative interest rates show that bank depositors cannot expect any sort of interest. On the other hand, borrowing is also cheaper than ever. It is obvious that the interest rates will rise at some point and the situation will change," M. Zalatorius says.

Meanwhile, S. Jakeliūnas reminds that when the bank system starts being dominated by political aspects, the image of the economy itself becomes warped.

"I believe that it is the banks that form the state of the economy, at least this was the case up to the crisis. The banks are a dominant system in the economy, thus I am wary of bank representatives' participation in politics. Failing to see this is inappropriate," S. Jakeliūnas said, adding that permitting Revolut's entry was a mistake.

M. Zalatorius retorted to the politician, urging to look at the facts, which can clearly be seen in the Bank of Lithuania website.

"If we are to look at the facts, we can say that to this day, there are 6 banks servicing Lithuanian residents. There is also a dozen unions, three new banking licenses have been issued. All this can be seen on the Bank of Lithuania website. Thus, in terms of competition, it has never been this great in the payment market. Then another question – what are our expectations, how many strong banks do we imagine there can be in a country with 2.8 million residents and they keep increasing. We must discuss this, if we have the expectation that a massive struggle will erupt over customers.

If the expectation is that lending interest rates will be zero, that's also not realistic. This discussion would be interesting. It would perhaps be real to have some ten banks and competition will certainly remain. Returning to Jakeliūnas' claims about some sort of money outflows or efforts to profit at the expense of clients, this should come to an end, you should not seek to antagonise," M. Zalatorius said.

Meanwhile, S. Jakeliūnas retorted to this that the discussion should be based on facts, not unjustified theses.

M. Zalatorius believes that it is risky to describe some banking newcomers as serious and others as not. He also emphasised that in the current situation, everyone could profit.

"I would rather not distinguish the banking system into serious and unserious banks. Only time will tell how newly starting banks will change the picture. If you expect rapid changes, it will not happen. But everyone will benefit – both the newcomers and the veterans," M. Zalatorius says.

"I agree that standards should be equalised," S. Jakeliūnas noted.

Swedbank in the lead

Based on accumulated property, according to consolidated data, at the end of 2018, Swedbank was in the lead. It had also attracted the largest number of deposits, while based on the portfolio of granted loans, leading positions went to the SEB bank.

Based on Bank of Lithuania data, Swedbank had accumulated 9.354 billion euro in property at the end of the year and based on this metric held 32.7% of the country's banking market. Over last year, Swedbank property increased 19.7%.

In fourth place based on property held at the end of last year was Šiaulių Bankas [Šiauliai Bank]. Its wealth increased by 11.5% over the year to 2.23 billion euro and comprised 7.8% of the banking system's wealth.

The overall wealth of the banking system rose 4.7% and reached 28.62 billion euro at the end of December.

In the ever-growing European alternative finance market, Lithuania - together with other Baltic...

Nine Lithuanian entities agreed on Monday to cooperate in managing risks in the financial technology...

Tautvydas Marčiulaitis: We are living better than ever before

We have just celebrated the 101st birthday of Lithuania and it seems that this occasion is becoming...

The Bank of Lithuania will provide assistance to the Swedish and Estonian financial supervisory...