Baltic States’ friendship: are we bound only by the Americans? 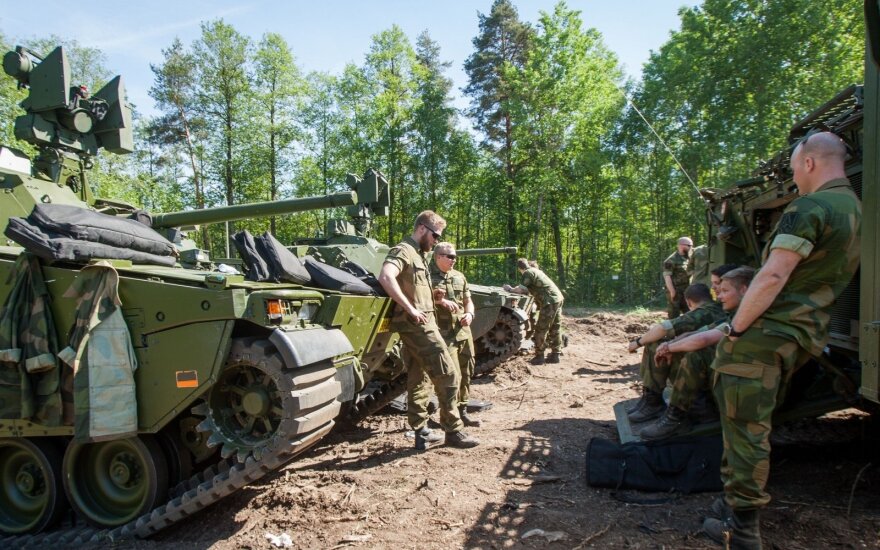 The military cooperation between the Baltic States is based on pressure from outside and not the political aims of the three countries. Only NATO and common threats help us not bicker, Estonia-based International Defence and Security Centre Analyst Tomas Jermalavičius said. According to the analyst, the Baltic States lack military integration, but today the situation is much better than say in 2005 when the countries' defence ministers did not even talk, Lietuvos Žinios writes.

There have been talks for a number of years on the need of defence cooperation between the three Baltic States, however the expert observes that it is still lacking, not just between the countries, but also in command and control structures, communication, military capacities and procurements, which could be jointly serviced.

"Logistics centres could be joint or for example if we talk about navies – all three bought minelayers (ship type) and now we have a situation where the Estonians are losing this capacity due to a lack of staff and funding to maintain it. Instead, we could have purchased and maintained jointly, formed teams which could have worked in rotation. It would have been a good niche and easily employed capacity.

There are spheres where we could easily integrated, but there are also those we could not because we are three sovereign states with our own militaries, their leaders and heads of state. It is completely the same as when talking about the EU army. Until the EU has a single minister of defence, a single president and a single military leader, until then we cannot talk about a joint military.

We are committed to aid one another in case of conflict, but if it were a wide-ranging conflict, every country would defend its own territory. We will certainly not send our battalions to Estonia if we are endangered ourselves," T. Jermalavičius said, noting that it is not the three state format which integrates us, but NATO. Not Vilnius, Riga and Tallinn, but Washington. Furthermore defence planning and political cycles have diverged, making the three countries move forward in different speeds, where during the crisis Estonia still had funding available for military projects, now Lithuania and Latvia are raising defence budgets, but Estonia has spent its funding for new projects already. When this part of the cycle ends, it will be the opposite yet again.

Nevertheless, the expert observes that this is not unique to the three Baltics, there is a general lack of coordination of financing and efforts across the alliance, with states also purchasing from a wide range of suppliers. This is especially notable with large states, which have their own defence industries and interests in those spheres.

In terms of ongoing cooperation, Jermalavičius points out that the Baltics are bound together largely by the Americans, with Washington stating that there is need to improve cooperation between the three Baltics and it only proceeding then. Funding from the USA is often intended for joint equipment procurements in order to stimulate the development of unity in the armaments sphere.

According to the expert, the greatest difficulties between the three Baltics arose when Western attention toward them declined, following accession to NATO and the countries being left to their own devices. "They thought we were adults, but we were only teens. It was specifically then that we started bickering. Meanwhile a number of disagreements and tensions have erupted, with the three Baltic States' defence ministers not even talking to one another in 2005 because they couldn't stand one another," T. Jermalavičius says, adding that other than external disciplining and pressure, the arisen threat also contributes to finding common ground. While there are talks about a "Baltic Entente", the expert believes that this would be harmful because the security of the NATO alliance is indellible and threats to Portugal and Italy are equally a threat to Latvia and Lithuania and vice versa. Regionalisation would only harm the alliance's security and indelibility principles.

When asked whether the return of mandatory military service in Lithuania and Estonia is justified and acts as a joint concept of Baltic security, he notes that the matter is nuanced. The return of mandatory military service is an increase in a country's military muscle volume, as compared to the muscle's power, but the opposite, a focus on professional troops is equally viable.

Nevertheless, the mandatory conscription programme being filled by volunteers displays the country's willingness to fight back, which sends a strong message to both allies and enemies – the nation has the will and ability to resist.

"Defence policy, as foreign policy, likes continuity, thus radical changes have to be well measured. That Lithuania managed to establish mandatory military service over such a short period is akin to a miracle. There was a great risk is that it could have been a harmful and failed move. One must admit that the political decision makers took up a serious risk, it would be difficult to risk with a difficult system often.

In Latvia, things are viewed with more care. They try to draw volunteers into their National Guard, but failing this and lacking people, they will have to turn to mandatory service. Of course, the question is how the Latvian public will view this. Latvia is more fragmented, which causes certain problems," T. Jermalavičius says.

Regarding the Russian hybrid threats, the expert points to the great shock in 2007 during the Estonian cyber-attacks and Bronze soldier crisis. For Estonia, this highlighted the challenges of combatting propaganda and cyber security. For Lithuania, the shock was greater after the Crimean conflict, rather than the Georgian one because in the former there was more funding available and more could be done, energy security and the cleansing of the information sphere became priorities. For Latvia, influence through the political and economic systems is the most relevant because Latvia faces the phenomenon of oligarchy, with Russian capital having a major influence in Latvia and corruption being the highest of all three Baltic States. The expert observes that the responses to hybrid threats are individual national responsibilities due to the difference in vulnerabilities and local circumstance, but good practice can be exchanged.

While the Zapad 2017 exercise ended some time ago, talks on it continue. T. Jermalavičius points out that the Russian plans for the exercise were no surprise to intelligence services, with Russia having practiced such scenarios before. Offensive and defensive plans shift to adapt to conditions, but the overall strategic image remains the same.

"What was important for us to see was what lessons Russia learnt from the conflicts in Ukraine and Syria. Because say the Ukrainian conflict showed what Russia learned from the conflict with Georgia. We now see what they learnt from the latest conflicts and how they integrate those lessons into their actions, plans and doctrines," the expert explains. He notes that the exercise was beneficial in strategic communication, displaying to Western societies that the threats Lithuania spoke of truly exist.