Bad news from the Liberals to G. Landsbergis

DELFI
aA
The Liberal Movement has refused to form a fraction coalition in Seimas with the Homeland Union – Lithuanian Christian Democrats (TS-LKD). This was confirmed to Delfi by Liberal Movement fraction prefect Eugenijus Gentvilas. 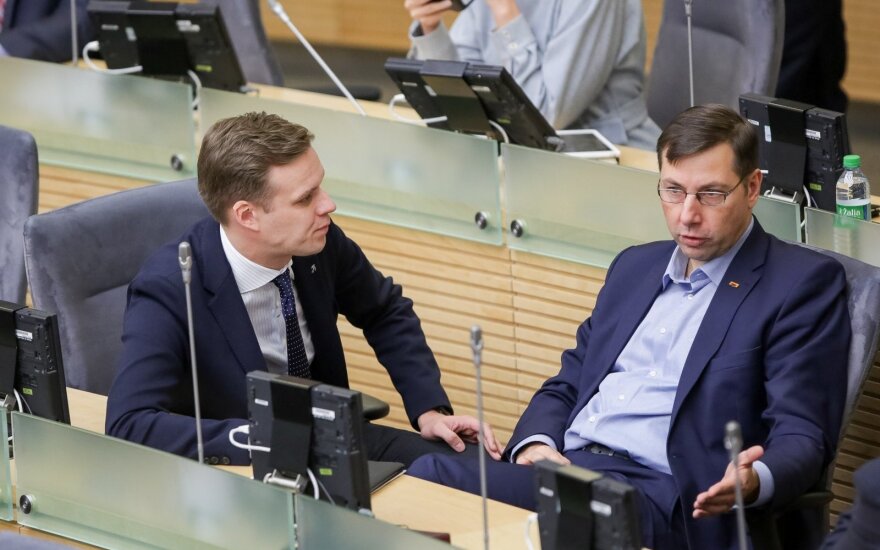 This decision means that the Conservative fraction prefect and party chairman Gabrielius Landsbergis cannot stand for election as the leader of the opposition, thus becoming a member of Seimas management and not receiving other rights outlined in the Seimas Statute.

The Conservatives have only 31 members in their fraction, while the Seimas minority contains a total of 63 members of Seimas, including the Polish Electoral Action, who have not declared themselves as being the opposition. All fractions that do not belong to the Seimas majority are included into the minority.

Since 31 members is in no way more than half of 63, lacking one member, the Conservative fraction prefect cannot become the opposition leader without the support of the Liberal Movement or another fraction.

E. Gentvilas states that his fraction’s decision to reject the cooperation agreement proposed by the Conservatives was voted for unanimously. “In this regard it is no longer our problem,” said the Liberal Movement fraction prefect.

“If Gabrielius will form a coalition, then the Liberals will be in it because they are close, let us not hide it,” the politician said in a discussion. She may not have entered Seimas, but these words did not escape the Liberal’s notice.

E. Gentvilas says that a coalition would be as if the Liberal Movement’s hands were to be tied.
“Why would we do it? Because the Conservatives need the opposition post?” the politician asked, while admitting that the TS-LKD has the right to seek the post of opposition leader.

G. Landsbergis – I am surprised

“We had a meeting yesterday. The conclusion was that the Liberals were proposing a rotation principle where we would make an opposition party agreement on cooperation on one question – that of the opposition leader. The post would rotate. That was their proposal. This morning we had a fraction meeting, the fraction was, in principle, positively inclined,” explained the politician.
“Thus I am surprised because I thought that it was a very constructive discussion. It really surprises me a great deal if that’s the case,” Landsbergis did not hide his surprise.

The Liberal Movement fraction prefect, however, notes that there’s nothing to be surprised about for Landsbergis as he knows everything.

“He’s in a shock? For what? What shock can there be if yesterday I showed him our fraction’s decision protocol? Yesterday he visited my office with Jurgis Razma and I said that our fraction deliberated, here’s the protocol and it was about the proposed cooperation agreement with TS-LKD. The results of the vote – there were 13 of us and we unanimously voted to reject the cooperation agreement. I informed G. Landsbergis and J. Razma about it. What sort of shock can there be? Let the man pretend he’s shocked, but he knows about it since yesterday,” noted E. Gentvilas.
The Liberal leader in Seimas also says he asked for understanding from the Conservatives that such is the Liberal’s position. E. Gentvilas said that his fraction would be fine with signing an agreement on an opposition leader, but the Seimas Statute states that it would have to be a coalition of fractions.

E. Gentvilas says he proposed to explain to the Conservatives how lawyers and Seimas Statute experts view the possibility of electing an opposition leader without forming a coalition. “We are not agreeing to a coalition, but we are signing an agreement on opposition leader G. Landsbergis. Yesterday I proposed it to them, but so far we have not heard back. I am not making this up, this is not the position of E. Gentvilas, but that of the whole fraction,” said the Liberal.

Does Landsbergis still have a shot at opposition leadership?

Failing to form a Liberal and Conservative fraction coalition, only theoretical possibilities remain to secure the post of opposition leader. The Seimas Statute allows one to declare themselves opposition leader if they are the prefect of the largest minority fraction, but nevertheless the fraction has to contain more than half of the Seimas minority.

Firstly if the TS-LKD fraction was joined by at least one Seimas minority representative (making the count 32 of 63).

Secondly if at least two Seimas minority representatives join the majority (making it 31 to 61).
“When I say it’s none of my business, it perhaps sounds cynical, but I do not want cynicism. Simply put the decision is not in my hands. The Conservatives have to look for a person,” said E. Gentvilas.

Delfi reminds that the Seimas majority is formed by the Peasant and Greens Union fraction, which contains 59 members of Seimas (56 victors plus 3 independents – Naglis Puteikis, Raimundas Martinėlis and Darius Kaminskas) and the Social Democrat Fraction of 19 members (17 SocDems and 2 Labourists).