Audronius Ažubalis, MP
aA
Both nations – the Lithuanians and the Polish – both recall well how our mutual conflict in between the two World Wars became a noose on both our necks. Then third parties put in great efforts in “helping” the conflict not reach resolution, but even the conflict itself was complex and difficult. 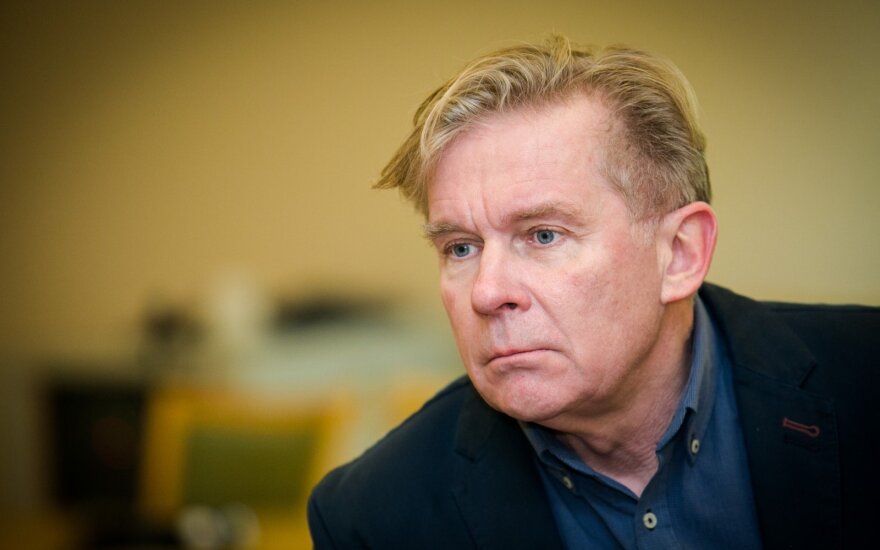 Today Lithuanian-Polish relations have once again become mired, just the basis is currently far less tangible, it is questions of the Polish minority in Lithuania, ones that have become an object of bilateral relations, pushing geopolitical challenges into the margins somewhere. As before, we can easily claim that the third party is at work here again. A role is also played by ambitions and differing perceptions of history. Nevertheless in order to not repeat historical mistakes we have to escape this cursed cycle and to do so we have to adequately review the current circumstances and begin listening to one another.

With the clamour of Russian weapons in our common neighbourhood I had hope that the Polish government will exhibit more interest in the post-election situation of Lithuania, stepping away from stereotypes. I hoped that the tone was set by the first public news after the heads of the two states in August where geopolitical challenges in the region were stressed and not the questions of domestic policy in each state. However it is becoming clear that there have been no changes in this regard in Poland and the state domestic agenda retains “the question of the Polish minority in Lithuania”, along with hard to understand initiatives such as pairing “Lithuanian nationalism” to the totalitarian Nazi or Communist regimes.

Hence it is obvious that Polish politicians will still need time and massive political courage before they are able to admit that the rights of the Lithuanian Polish community and its conditions for fostering Polish culture are exemplary in our state. Such courage as that displayed by late President Lech Kaczyński on the 70th anniversary commemoration of the Second World War, when he stated that “Polish participation in the 1938 annexation of Czechoslovakia was not only a mistake, but a sin.” All nations have debts to settle with history, often this becomes a premise for disputes between various nations. Nevertheless real leadership begins from closing such account in a way where the harmed party feels an earnest wish to come to terms.

Unfortunately over a series of years Kremlin assistance and the self-declared representative of Russian and Polish minorities in Lithuania Waldemar Tomaszewski’s manufactured “images” have become “reality” for Polish politicians, creating a so far incorrect belief, upon which the Polish political agenda in regard to Lithuania is currently based.

We often hear accusations of failure to meet commitments, I personally experienced one such episode during a meeting with a colleague while working as Minister of Foreign Affairs. At the time I proposed to set copies of a Lithuanian-Polish cooperation agreement from 1994 in both languages, one which is rarely mentioned or cited, and compare, perhaps the disputes are coded in differing interpretations? However I received a response that there is no need to compare the agreements because to evaluate the commitments “received reports”(?) are enough. Differing interpretations of the agreement could be the source of disputes, but the Polish representatives still refuse to sit down and discuss it.

We keep hearing that the Situation of Lithuanian Poles in education is worsening due to the closure of schools that teach in Polish. However this is a selective explanation which ignores the fact that school optimisation is ongoing across Lithuania due to the overall reduction in student counts, namely due to objective demographic reasons. Lithuanian schools are being closed down and merged even more rapidly than Polish ones in areas inhabited chiefly by ethnic minorities.

When during a visit to Lithuania President Bronisław Komorowski was presented with a large batch of teaching materials in Polish, released by the Lithuanian government for Polish students and a small number of Polish published textbooks for Lithuanian students living there, there should have been little reason left to doubt in our attention to citizens of all nationalities. However this was ignored, just as the presented confidential information on active and successful Kremlin “care” in uniting pro-Kremlin Lithuanian Russian speaking organisations with local ethnic Polish politicians.

What we do have to admit, however, is the long term apathy of Lithuanian governments for the social and economic circumstances of South-Eastern Lithuania. The region’s deplorable economic situation has not only created an image of an isolated island, but has also helped Kremlin narratives establish themselves in the minds of locals. There is no doubt that this isolation was unfortunately furthered by local politicians flirting with the Russian embassy and its targeted donations, with the Polish Electoral Action at the forefront. The Eastern Europe Studies Centre which operates in Lithuania has found that it is specifically the socioeconomic segregation and not the writing of names or street signs that creates the greatest isolation and the greatest dissatisfaction of ethnic minorities.

For a time now a clear understanding has established itself in Lithuania that if people are given the opportunity to live with dignity, earn and be independent from the hierarchical governance structures that dominate municipalities, they will be far more resistant to local propaganda and will be involved in public life as equal citizens of Lithuania. Is it not this, rather than secondary, politicised questions, that should be our joint concern, when talks turn to the Polish minority in Lithuania?

Lithuania, just as Poland, has a deep national historic memory. It was not even broken by the totalitarian regimes of the 20th century and armed resistance to the red aggressor lasted longer here than anywhere else. We were not defeated by the KGB and the entire Soviet gulag terror. This raised the strength to resist imposed rules, unjustified demands and prior conditions. But also being open to developing relations based on mutual respect.

Mutual respect and listening in is what relations between Vilnius and Warsaw should be based on. Resolving the issues of the Polish ethnic minority in Lithuania is no less important for us, but we have to specify what problems actually exist and what is just someone‘s manufactured mythology. And even more important is that it would not overshadow our common goal in the face of geopolitical unrest.

Of course looking from the viewpoint much favoured by the previous government, of Poland as a member of the concerto of great European states, Lithuania is too small and unimportant a partner. However in politics and especially today it should not just be the games of large countries that matter, but specifically the consolidation of the region and neighbours, just as outlined by the “Jagiellonian” Polish foreign policy paradigm. Thus antagonism with neighbours, be it Lithuania or Ukraine, has few good prospects.

The political heritage of Józef Piłsudski, with 2017 being announced as being his year by the Polish Sejm, which contains numerous visionary images of the region’s integration will always remind Lithuanians of the annexation of the Vilnius region, hence also with the ruined opportunity of forming the Baltic Entente or a wider regional bloc. However in the contemporary context Lithuania sees importance in Poland taking up regional leadership and not repeating past mistakes, instead taking up the task cherished by J. Piłsudski of consolidating the countries of the region against the potential threat in the East.

This text was published on January 24, 2017 in one of the right wing Polish newspapers Dziennik Gazeta Prawa and prior to yet another provocative proposal by Polish Electoral Action in Lithuania vice Chairman Zbigniew Jedinski to sign a non-aggression treaty with Russia, once again proving the relevance of this text.