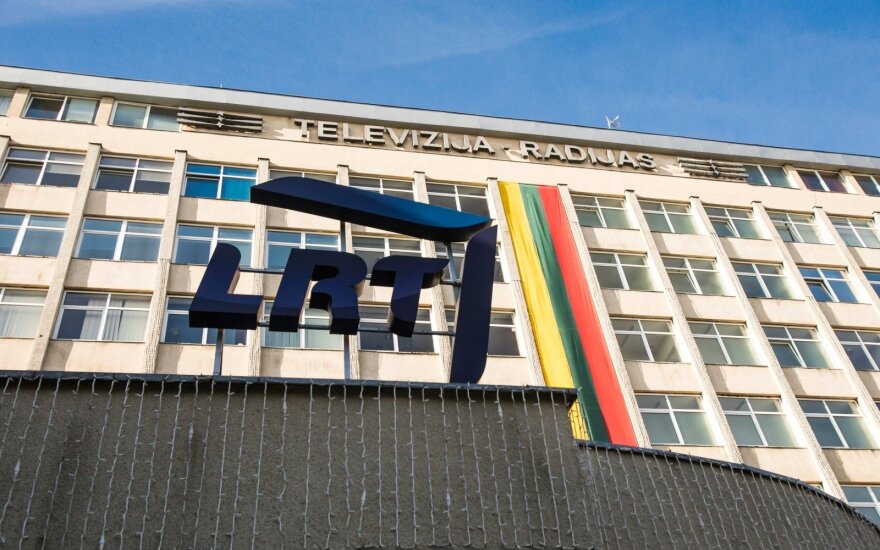 The ruling Farmer Greens, who are aiming to change the LRT's management and council member appointment procedures, are by far not the first to have taken aim at controlling the national broadcaster. Analogous initiatives arose among previous governments as well – at one point, the LRT was headed by two director generals because of political bickering and Andrius Kubilius during his tenure as prime minister wanted the same that Ramūnas Karbauskis is proposing now, lrt.lt writes.

"No safeguards, no laws or recommendations can remove politicians' attempts to control the national broadcaster. This can be done in various ways. Only the maturation of the public and its citizens can save from it," Vilnius University Communications Department professor, former LRT Council chairman Žygintas Pečiulis wrote in the journal Informacijos Mokslai eight years ago.

According to the professor, when national revival began, the LRT manoeuvred between pressure from the official government and the Sąjūdis. In 1990, when independence was declared, the State Television and Radio Committee was reorganised into the Lithuanian Radio and Television (LRT).

In 1996, the Seimas passed the public information and LRT laws, where the principles of the national broadcaster's management were enshrined. Differing terms and rotation were planned out, the LRT Council's composition did not match with the political election cycle. The LRT council declared a public competition for the office of LRT director general, approved a management for the public broadcaster for a five-year term. Up to then, the LRT director general was appointed by the Seimas.

Soon, however, it was sought to change these regulations.

At one point, the LRT had two directors

In the aforementioned article, Ž. Pečiulis discussed two specific cases where "the Lithuanian political government sought to pressure the public broadcaster." In 1996-1997, it was sought to politicise the LRT by formally depoliticising the LRT's management.

Back then, the Lithuanian Democratic Labour Party (LDDP) and the Homeland Union, as well as Christian Democrat parties' interests clashed over influence over the LRT. According to Ž. Pečiulis, open political conflict over influence in the LRT lasted almost a year and a half, more than just the audio-visual sector was involved into the events, not just the Lithuanian news media, but also the courts and the public. The crisis shook the country to its constitutional core.

When the formation principles for the LRT Council were changed, the previously appointed LRT director general was dismissed and replaced with one loyal to the new political majority. At one point, the LRT was headed by two director generals: Vytautas Kvietkauskas and Arvydas Ilginis.

A. Kubilius' government also clashed with the LRT

In 2009-2010, politicians once more sought to change the LRT Council member appointment procedures. The ruling Conservatives registered amendments in Seimas back then, based on which council members were to be appointed for the term of the delegating institution. In other terms, a newly elected Seimas or president would appoint new council members, furthermore they could dismiss a council member. This is exactly what the "Farmers" are proposing now.

This is not all: it was proposed that if the Seimas rejects the LRT activity report, the LRT Council would have to review the director general's suitability to remain in office.

"It is rather hard to comprehend why the coalition government or opposition is now represented by representatives of those, who are no longer in Seimas, the ruling coalition or the opposition. Or why should the president be represented by someone she has neither appointed, nor seen?

I remember an excellent tale about Karlsson-on-the-Roof, where if I recall right, Karlsson is asked by a child, whether after his brother's death, he will have to inherit his brother's wife. In Lithuania we have numerous such Karlssonian set-ups and they have to be resolved," the then majority leader, Prime Minister A. Kubilius said.

Professor Ž. Pečiulis noted back then that politicisation of the LRT is being done under the guise of management optimisation. The likely result of such changes is changes to LRT management after every election.

Back then, LRT Council chairman Gediminas Ilgūnas told Delfi that, "The scenario of 13 years ago is repeating." G. Ilgūnas then explained that the LRT law amendments sought to take down the then LRT director general Audrius Siaurusevičius and the council. By the way, the Seimas delegated G. Ilgūnas belonged to the Social Democratic Party.

And this was certainly not the only proposal from the Conservatives. Despite the A. Kubilius government drastically cutting financing for the LRT and with the national broadcaster mired in hardship, it was proposed to not broadcast advertising on LRT channels, thus removing an income source. Back then as well, such initiatives received a response and concern to the Seimas from the European Broadcaster Union (EBU).

At that point, it was necessary to shorten LRT radio and television channels' broadcasts, reduce wages. Due to lacking funding, in 2010, nighttime Lithuanian radio broadcasts had to be ended.

"What is normal function? I sleep at night. Why do you broadcast while I sleep? Better let people sleep. I cannot comprehend: if people are working, they need to work, not watch TV or listen to the radio," A. Kubilius saw no issue back then.

Back then, it was the Social Democrats, who aided the LRT.

Social Democrat Vytenis Povilas Andriukaitis noted back then that LRT audit was being performed at that time, Seimas waited to approve the LRT reports. "Is it not better to wait for audit results, the evaluation of the financial situation and only then think, what to improve and how, rather than do what we are doing now? Don't you think we are like a manager running in front of the train, as things are?" V. Andriukaitis asked.

Ž. Pečiulis sees a government instinct to interfere with the LRT

Déjà vu. Such is the word first coming to mind for Ž. Pečiulis when he hears of the current majority's ideas about the LRT.

Ž. Pečiulis finds the commission in the Seimas and the arising LRT management change initiatives akin to propaganda. He reminds: it is set in law that the Seimas must confirm the LRT Council report. This procedure has been halted and all sorts of political processes started.

"From what we hear now, there is echoes of politicising by depoliticising. There are talks about how to my knowledge, Mr. Karbauskis has asked the director general – "Do you want for us to depoliticise you?" I can tell, what this smells of – in such cases, the Seimas and presidential institutions' representatives are abolished, a group is gathered from public organisations. Now a group of friends would sit down and pick from public organisations, there are some 600 of them in Lithuania. So who can explain, under what principles would 10 or 12 of them be chosen?" Ž. Pečiulis warns.

This is why, the professor cautions, this step is especially dangerous and forms excellent ground for the ruling coalition to politicise the management of the LRT. He is concerned by individuals appearing, who are publically praising such ideas of depoliticisation.

In Ž. Pečiulis' opinion, the LRT Council and administration should clearly display its spine and disregard illegal requests and demands.

He describes efforts to interfere with the LRT's functioning as the government's instinct. In Ž. Pečiulis' opinion, even some highly ranked politicians fail to understand, what the national broadcaster is – they do not distinguish it from a state broadcaster.

But what do we see now? There is not a single opposition representative in the commission to investigate LRT activities, in essence all the conclusions and proposals stem not from the Seimas, consensus in it, not from democratic representation, but only from the ruling coalition. In essence, there can be no comments here, if the majority, disregarding everything, wants to deal with the LRT. Considering the criticism the majority is faced with, you cannot describe it in any other way than revenge or efforts to put in place, suppress or silence," Ž. Pečiulis said.

"These initiatives repeat, they are linked to a simple desire – for politicians to in principle have greater influence in the LRT. I couldn't even say that this is linked to a desire to influence specific matters, but rather it is a principal attack for any institution, which matters in Lithuania," D. Radzevičius stated.

He explains that these trends are visible and can even be compared – politicians seek to control not only the LRT, but also the Seimas Ombudsmen's Office and the Chief Official Ethics Commission. D. Radzevičius points out that in many cases, the claims are about strengthening the organisations, improving their efficiency. For most parties, political influence is primarily linked to having as many as possible of their own, loyal individuals present.

"How are the current initiatives different? A pretext was sought during the investigation, ad hoc commission, forming a number of reasons, even if nit picking, perhaps not even directly linked to management, only with separate people, the quality of their work, but in fact basing the initiative in the past and in details," the former LRT Council chairman said.

D. Radzevičius was a member of the Council and led it during the crisis. In late 2008, the country's government was changing. "At that point, during my tenure as a member of the council and even its chairman, the then head of cabinet never found a pretext to meet and discuss what the government could help with after all during the crisis. At that time, we faced much criticism of the LRT," the former chairman recalled A. Kubilius' tenure as prime minister.

As an example of pressure, he presented the one sided decision to cut funding, disregarding any comments and proposals, alongside demanding Seimas rulings for the LRT to broadcast the LRT Lituanica channel. Thus, content was not provided a single cent, however the Council and administration would face complaints in LRT committees, why they are not creating original content in other languages.

"This somewhat smells of political mockery, when on one hand insufficient funding is provided, while on the other hand, you demand the LRT to perform a broad mission. At the time it was most felt that despite the hard times economically, there was no earnest desire from the majority to truly aid. Quite the contrary – we even felt various hints that when the management and director changes, perhaps something will improve. The hints would come from various people, who were alongside politicians. Political pressure is most often felt indirectly – nit-picking, failing to help with fundamental problems, this all sends signals, how politicians view you," D. Radzevičius said.

Nevertheless, A. Siaurusevičius withstood it and did not resign.

"I have not heard any guarantees that if I resign, further funding would immediately be provided for the LRT," A. Siaurusevičius answered, when asked in spring 2010 if it is true that if he were replaced, the government would find further funding for the LRT.

Lithuania's parliament on Tuesday rejected the conclusions of an ad hoc investigation commission on...

LRT investigation. Cyber security centre can also spy – theoretically, it has all the capacities

A. Jokubaitis warns regarding the LRT: a short circuit awaits