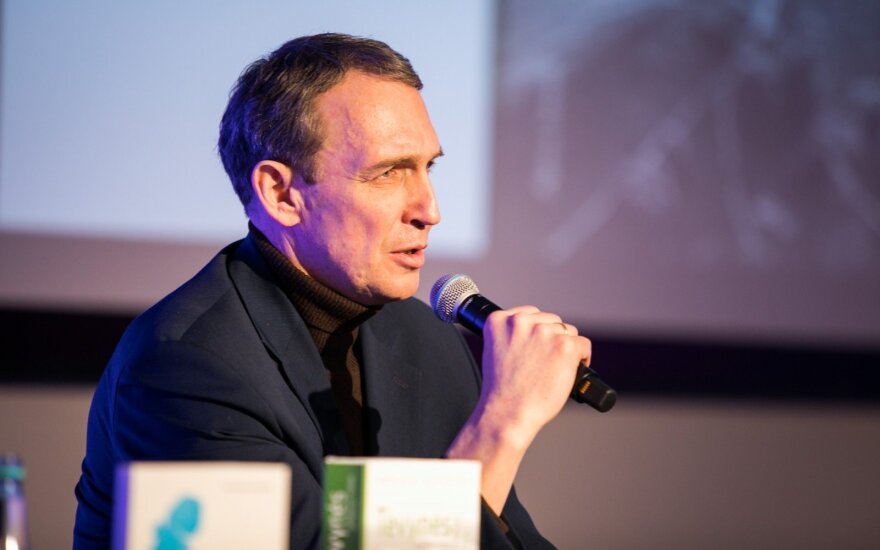 Major Lithuanian news media did not seriously review US President Donald Trump's September 26 speech at the UN General Assembly, which shook the world political community. Prominent analytics say that this dramatically changes the accents of international politics. Meanwhile, in Lithuania we have silence.

For the first time, even analysts who view Trump with caution or even mockery, listened up. The dispute and tension axes in the world cracked. This is because the US head of state, who clearly represented the joint position of the administration this time, declared that the neoliberal world globalisation has reached the end of its road. He clearly declared that not only the USA, but every country in the world must (not only can) oppose the dictate of supranational organisations. Countries should operate based on their own nations' sovereignty and patriotism.

Related articles
Arndt Freytag von Loringhoven: the exercises ‘Vostok-2018’ are biggest since the end of the Cold War, but figures were most probably exaggerated
V. Savukynas. The time of faltering illusions

Having watched the goings on in international politics for many years, based on both Eastern and Western sources (which were accessible to me in mostly English, German and Russian), I was left with a grim image of the Lithuanian public sphere's isolation. A few statements from the presidential palace, a few statements from the Foreign Ministry and "everything is clear" to us. Beyond that – only platitude filled palace political science. We only repeat the clichés of international neoliberal news media, which support the ideology of globalism. Unfortunately, we have ever less clarity and independent perception in our public sphere because there is still no serious analysis and discussion room of political processes in Lithuania. Lacking in strength? At a time when international changes are clear and dramatic.

There is a pleasant exception in the works of young political scientists gathered around the Vilnius Forum, which revive the critical thinking culture in international politics monitoring. Vytautas Sinica's article that appeared a week ago is notable. In it the author accurately raises two key historical events. First, the European Union's federalist direction's desperate radicalisation when the two major EU countries' neoliberal, eurofederalist groups are drifting toward "pragmatic relations" with Russia; second, a deepening divide between the US and major EU states, in other terms, the growing disputes between the heads of NATO and EU.

Both processes are especially dangerous to Lithuania.

I have already written about the pursuit of the Homelands Europe, which is growing in Europe's Visegrad states, now also supported by Austria and even Italy (completely based on the path of mass illegal migration to Germany!). In Germany, the popularity of the AfD is growing (this party is now in second and it is closing on the long leading Christian Democrats). However much the ideologists of Angela Merkel may accuse her of "populism", this does not help – the Germans' eyes are opening. eurobureaucratic illusions that EU state citizens agree with federalism and the complete merger of nations is just illusions. The more they are consumed, the worse for Europe and thus also for us.

The European Union will never become a federation, regardless of the plays made through European Union agreements. These games have no legitimacy and some sort of new empire cannot be created in Europe.

However, Eurozone federalisation has gathered momentum. Two speed Europe is once more being imposed – those, who will walk in step with the Berlin-Paris "integration centre" – not just the common currency, but also even military, law enforcement, direct taxes to the "federal budget", EU regulations, which become direct laws on the entire zone, disregarding national constitutions – this is a mockery of the thousands of years of European law. "Second speed" countries are being cast aside, with either major penalties lined up (disagreeing with the distribution of illegal migrants) or... lesser financial support. National sovereignty for sale?

By penalising the "second speed" EU states, tensions over the future of NATO could also be created. Now this is a threat to Europe itself. But Emmanuel Macron says there's nothing to fear, we will propose a "new European security system." This will be a truly modern system – together with Russia.

Vytautas Sinica emphasises that our political elite not only pretends that nothing significantly new is happening, but in essence are supporting the expressive Emmanuel Macron and silent Angela Merkel eurofederalism out of inertia. It is very curious that our "great fighters against the Kremlin" are completely unfazed by these political leaders' drift toward Russia. In other terms, one has to agree with V. Sinica's conclusions that our elite is calmly enacting the neoliberal order of Berlin and Paris, disregarding even national security interests.

Donald Trump's September 26 speech unveils all this and puts it in perspective. It is a systemic speech. Why? The US president systematically rejected globalism, speaking about a new system in the world and the US' new role in it.

I recommend analysing D. Trump's speech with care. We will then see that the politics so far described as chaotic are nothing but. The media and US president's fervent opponents from the neoliberal camp truly misled the world. D. Trump is not at all a coincidental political figure. He is no coincidence in either US or world history.

He is the professor of fundamental changes in the world, akin to media. The feverish attacks of the world neoliberal media against D. Trump have no future. Accusations of a potential secret conspiracy with the Kremlin? Proverbially, the pot calling the kettle black... Especially to be said of the European neoliberal elite.

Everything is the contrary – D Trump sees the ongoing tectonic shifts especially clearly and geopolitically. He sees much clearer and further. The arrogant neoliberals see only their own anti-national principles and uphold subservience to the short-term interests of international corporations. And amorality.

If you want the US to contribute to your security, do not hand over your energy security to Russia. The USA is a core NATO partner. Unreliability reeks from the current ruling classes of Germany and France. They are meandering together with their commitments to business groups trading in Russian gas. And oil – oil with the East now.

What does this mean? "Global certainty" operated for several decades, where China made use of trade privileges, but now the certainty, when cheap goods flooded into the US and trade moved to China together with technologies, is gone.

To understand the reasons of this dramatic break, we should become acquainted with not only D. Trump's speech, but also with the recently published Chinese Communist Party international politics direction. It announces that China will save the world from the US'... global uncertainty.

The USA grew Chinese economic might itself and it is now challenging the US itself, finally forcing the use of national barriers and preventative measures.

Chinese trade intervention is now cutting into the US economy.

The USA tolerated trade deficit to China since 1974 (due to cheap Chinese goods, lower Chinese living standards, subsidies and protectionism). However, reflection appeared when in 2017, the US trade deficit with China reached 375 billion dollars (US export – 130 billion USD, import – 506 billion USD). What is this? Here's what it is: the classical period of "free market and trade" has ended.

This is why the US is forced to make use of protectionist measures. Because China is "fighting" for free trade in the name of its own expansion. The Chinese ruling elite wishes for the supranational international trade system, which favours the growth of its strength, to continue operating. But the US said "Stop".

What a paradox! Now it will be China, who will defend globalism.

From here – a new bipolar system. The USA – China.

Yes, the world system's internal discord has reached its peak.

What is Russia's place in this balance? Russia is naturally becoming a Chinese satellite – in opposition to the USA and NATO. What is the place of Europe and the EU in this? For now as follows – Russia operates by using gas, which it offers as a security guarantee to Europe. A Europe without the USA.

Russia is not the only to act in concert with China. It is important to us, how China is entering here. It is doing much. Take the grandiose Silk Road continental infrastructure project. It is aimed at the Baltic States. Even gaining momentum in Belarus.

Lithuanian foreign policy can no longer fail to see these processes. Unfortunately, it would appear to be doing just that.

We have no basis to expect that Lithuania will manage to avoid danger by simply floating downstream with eurofederalism. You cannot go far just through tactical pandering to it for it drains the strength of every European state. Europe, by continuing to demonstrate openness to the Muslim world, may soon change to the extent that it will lose the controls of the elite and government. The core of the European Union does not have the capacity to become a new centre of power for globalism.

However. It remains important to us as a common economic area. Even becoming more necessary.

Thus, it is important for Lithuania to maintain a balance, together with other EU countries, ease the disputes between the heads of NATO and the EU, operating based on our own national security and state welfare interests. Regional cooperation with Latvia. Only the cooperation of the Baltic States with the Visegrad group can help retain balance in EU internal politics, not forgetting prospects of cooperation with Northern Europe.

A strategically favourable time is arriving for Homelands Europe. By maintaining strong links to NATO, we can revitalise national powers for creation. This is the sort of revitalisation Pope Francis spoke of during his recent visit to Lithuania. The main identity of a human being is belonging to one's nation, he said. Especially emphasising it in Vilnius, Cathedral Square. At the location of the first great Sąjūdis protest.