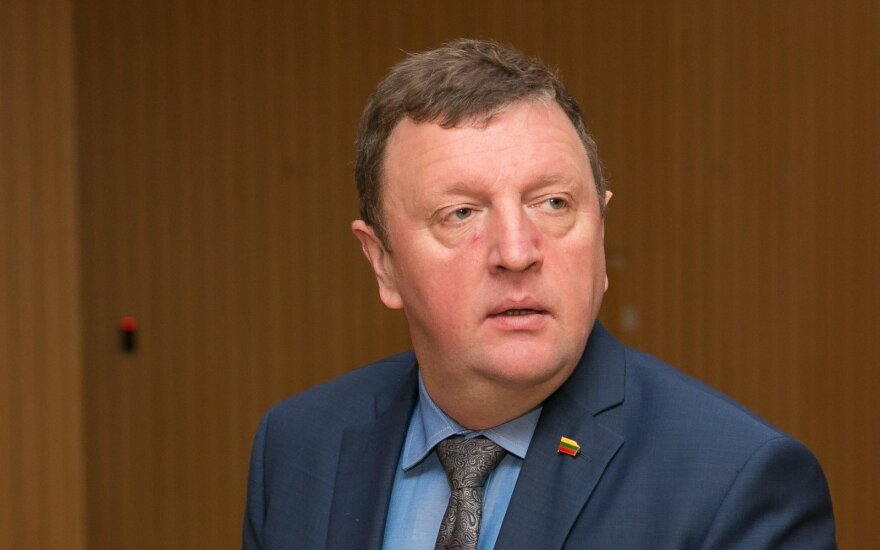 The Seimas Anti-Corruption Commission has completed its investigation on the creation of the e. healthcare system. The official results are to be released on Friday, however it is already known that it was those involved in its creation that profited the most from the project valued at tens of millions of euro. This was discussed on the LRT Television show Dėmesio Centre with the Anti-Corruption Commission chairman Vitalijus Gailius, LRT.lt writes.

The politician emphasises that the commission's task was to identify specific individuals, rather than place the blame on a collegial organ. The creation of the e. healthcare system was officially started in 2005 by the then Minister of Healthcare Žilvinas Padaiga of the Labour Party and V. Gailius explains that the minister made decisions then which led to a situation where individuals and companies linked to him embedded themselves in the implementation of the e. healthcare system. This included the Kaunas Healthcare University where Ž. Padaiga was the dean of the International Relations department. V. Gailius also notes that the dean was tried in 2011, but thanks to the vouching of Saulius Julius Janonis, he avoided any repercussions, even remaining dean and continuing to operate business under the cover of the university, controlling funding flows.

"If one wants to maximally increase the flow, someone holds a hand on the tap. And it is namely the contractors that have their hand on the tap, those who actively participate in procurements to this day. Yes, they change places, but that group of individuals is linked and at the time they were all linked to the political leadership of the healthcare system. These people are implementing systems to this day. We contacted the Public Purchase Service, which has recently directed to halt contracts with the Panevėžys hospital," explaining that it was discovered that advisor to the minister of healthcare A. Daunoravičius has been meeting with both the heads of the institutions where the system is being implemented, as well as the contractors and it is currently unclear whether this was at the minister's behest.

Law enforcement responses have also been included in the Anti-Corruption Commission investigation. The commission chairman recalls how after critical State Control statements in 2008, various Seimas subjects such as the Audit Committee and Healthcare Committee appealed to the prosecutors, but the prosecutors' office responded that no harm had been done and refused to initiate an investigation. This, the politician highlights, was decided by prosecutor E. Vaitiekūnas, who, as part of another investigation later, was tried for graft. V. Gailius explains that the Anti-Corruption Committee has come to the conclusion has come to the conclusion that this led to an atmosphere of invulnerability, which led to the State Control conclusions to be disregarded in terms of law enforcement. In 2013 the Supreme Court ruled that 800 thousand euro had been lost in damages and individual responsibility had been identified, but those identified had already departed the ministry, thus avoiding accountability and the question of damage compensations was left unresolved.

While Ž. Padaiga has stated that the Ministry of Healthcare no longer really has a single individual who would have participated in the creation of the e. healthcare system in one way or another, V. Gailius emphasises that instead they now work in the businesses that are implementing the systems.

While the head of the Anti-Corruption Commission admits that the e. healthcare system does currently work, it only works to the extent of just fulfilling European Union minimum requirements. Nevertheless the commission is questioning the inappropriate usage of funds in other stages of the programme and prosecutors have started the process of defence of public interest. "In fact, in terms of accountability, the prosecutors will have to clearly review the places where harm is done and what the harm is in the defence of the public interest they have begun. I have mentioned one source of harm – it is obvious, but the exaction procedures were not started because supposedly there is no-one to exact from – the individuals no longer work in the ministry," V. Gailius stated, pointing out that Ž. Padaiga, S. Janonis and H. Baubinas are either the leaders or stock holders of the business entities that are linked to the implementation of the e. healthcare system. The Anti-Corruption Commision has gathered information and forwarded it to the Prosecutor General's Office with a request to make process decisions.

The politician notes that there was already basis for prosecution of the individuals involved in 2008, but the moment was missed and today it is instead necessary to discuss the currently ongoing processes, with contracts being signed despite the Public Purchase Service ruling they must be cancelled and furthermore the signings being with companies, for which it is likely the procurement requirements are tailored. This, Gailius stated, calls for law enforcement attention, as the actions can be identified as abuse of office, fraud and illegally taking possession of property. "In each case, in each institution there is a specific individual identified. Some of them, by the way, still work in state service," he said.

While the prosecutors refused to initiate an investigation in 2008, there have been many talks and articles about abuse in the implementation of the e. healthcare system. V. Gailius points out that because the prosecutors did not take steps to initiate a new investigation up to now, his commission has raised the question of political responsibility, identifying responsible officials – ministers, vice ministers, ministry secretaries, commissions and other who were responsible for projects which do not hold up in front of criticism.

When asked how much benefit the companies related to the individuals the investigation has identified have had over the entire period, V. Gailius stated that, "The State Tax Inspectorate is cooperating with us and has begun control procedures based on the data we have provided. And we haven't just gathered tax data, not just the contracts, but also the transactions by the companies themselves, how many author contracts have been signed. To take an example, there was an agreement with a historian, who, based on an author contract, received over 10 thousand euro for the implementation of an information system in a healthcare institution. And that historian was the brother of one of the company leaders." The politician believes that while the contract was signed with the brother, the money went to the company leader instead. "The prosecutor had to evaluate such data himself, so why didn't he do it? Well, we know his story – he was later prosecuted for one of the largest bribe demands," V. Gailius concludes.

V. Gailius and A. Abromavičius offered respectively the posts of justice and economy minister?