Analysts: we‘ve never had a Prime Minister like that 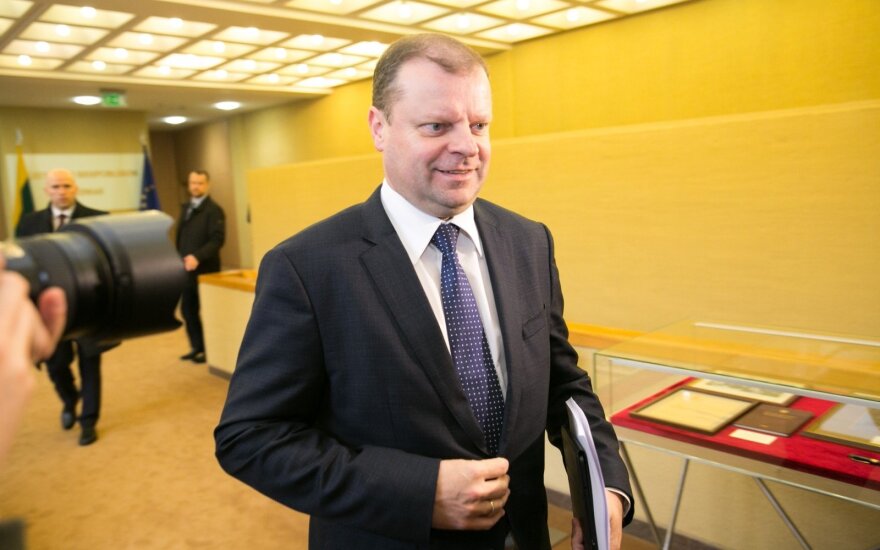 The rhetoric of Prime Minister (PM) Saulius Skvernelis is massive and this politician did not make the jump from the General Police Commissioner to the Prime Minister's level. This was said to LRT.lt by the analyst Rimvydas Valatka. On the other hand political scientist Lauras Bielinis and public relations expert Orijana Mašalė state that the clear rhetoric's of S. Skvernelis is liked by the electorate, and that there are higher notes in politics.

After an unknown meeting took place in February of this year t between PM S. Skvernelis and head of the opposition, Conservative of Gabrielius Landsbergis, S. Skvernelis said they only talked about „Eurovision". "We talked about the situation, when our favourite Lolita Zero lost her spot in the contest", - commented the PM.

Related articles
Political analyst: S. Skvernelis wants to jump from one post to another  (1)
Word duel between Skvernelis and Paluckas: who won?  (1)

In March, S. Skvernelis criticized the mayor of Vilnius, liberal Remigijus Šimašius by saying that he only did one thing during his term and that is cut illegal fence Thuja, and there is no breakthrough in other areas.

In April when the Social Democrats elected Gintautas Paluckas as a chairman, S. Skvernelis expressed no intention to meet him and told him to return to reality. Moreover, by refusing to meet him, S. Skvernelis began to joke about the partnership law. "Although Gintautas said that he's for partnership, maybe he is jealous is. I think, that I will communicate with party leaders and will continue to do so in the future", - explained the PM. This is how he commented on his decision to meet with G. Landsbergis and not G. Paluckas.

That's not the only known saying of his since he became the PM. Who encourages him to do so and is it suitable when he is in one of the most important posts in the country?

R. Valatka: S. Skvernelis behaves as if he was a President

Political analyst R. Valatka said that the Prime Minister's rhetoric is not arrogant but simply poor.

"Arrogance is a sign of the mind, because those who talk on TV, look good and make no mistakes and talk in short and curt sentences are called arrogant. S. Skvernelis is not arrogant because his rhetoric is poor.

It didn't make the jump from the General Police Commissioner to the Prime Minister's level. It seems to me that it won't happen since it requires an intellectual base, to read many books and a different life. If a person starts to think about it after he's 40 then he has be in study centre, in the woods or in the library and not be a PM. To work there and look at your own life, "- commented R. Valatka.

According to a political analyst, S. Skvernelis stumbled when talking about G. Paluckas after he was elected as a chairman for the Lithuanian Social Democratic Party (LSDP): "What was the point to say that? You will have to work with that person, and constantly need 19 votes. I think that he thought after the fact - why did he blurt that out? Also, the two politicians are nearly friends, so just imagine what would happen if not a friend had been elected."

R. Valatka thinks that this rhetoric is not suitable for a Prime Minister, who "makes important decisions and manages 9 billion Euros".

"Jokes like these happen not the first time in Lithuania. There was Viktoras Uspaskichas and Rolandas Paksas. We can remember and Arturas Paulauskas who also threw words but also very quickly invited Rima Pumputienė to his team. R. Paksas quickly invited Dalią Kutraitė. And these women acted as their mother, nanny, teacher and, political scientist. They used to say: stop talking; you can't say this. S. Skvernelis doesn't realise that he needs a person like that, a person who would change his sneakers into dress shoes" - taught R. Valatka.

According to the analyst, S. Skvernelis behaves like he was a President but the current President Dalia Grybauskaitė doesn't use such rhetoric's.

"D. Grybauskait4 has learned to talk long ago. Her sentences are from 13-15 words, like poetry. After the third sentence you forget the content and only the form remains. As far as I know, she studied with Eugenijus Laurinaitis, who is one of the most interesting psychoanalysts. 30 years ago she attended his courses at the society "Žinija".

We could sometimes pick at her speaking but she graduated in economics and has taught. They rhetoric's are often unsuitable for her post but if you compare it to S. Skvernelį, the latter loses context all together. Police Commissioner can speak like that but not the Minister of the Interior and especially not the PM"- explained R. Valatka.

S. Skvernelis is walking a thin line with rhetoric like this. "You can't just joke like this. Maybe he will go for the Presidency but if he doesn't get it then it will be his own fault" said R. Valatka.

Head of the Communications company "OMConsulting" Orijana Mašalė told LRT.lt we've never have PM like this and it's natural that many his rhetoric might seem unusual.

"S. Skvernelis has a bold rhetoric as the PM. It may be fun, that man did not change even after his position has changed. The PM's communication on Facebook is also different - there is no political politeness. For some people it may seem that this communication has its advantages. Political rivals find it annoying but the activity is liked by the voters this is one of the reasons why we trust him"- explained O. Mašalė.

Public relations experts say that Dalia Grybauskaitė and S. Skvernelis rhetoric are very different in vocabulary, the style of language. "The correct rhetoric of the President is polished and thought out, and the PM is sarcastic and ironic. For me it is different but it is an advantage for a politician. You have to do something to be notices and remembered "- noted O. Mašalė.

She doesn't want to call S. Skvernelis rhetoric arrogant but it's important to keep in mind that the PM talks to the political opponents and competitors, and not the voters. "Naturally, they think of the next election. It is put towards competition. Is the PM talking to regular people? I did not hear that. And this rhetoric is directed towards the political space "- said the public relations expert.

They said that communication must lead to dialogue, there are higher notes in the dialogue of business or public policy. "I could evaluate S. Skvernelis positively because he becomes visible, interesting and unique. He attracts attention and creates a basis in order to be heard "- said O. Mašalė to LRT.lt.

Vytautas Magnus University (VMU) professor and political scientist Lauras Bielinis states that S. Skvernelis language is visible with short phrases, which give him an advantage over opponents.

"He's not the only one we've got because the younger generation will show even more. G. Paluckas, G. Landsbergis also talk in short phrases and provide clear images. In the future we might see a colourful debate, "- said L. Bielinis.

According to the VMU professor, D. Grybauskaitė also spoke out categorically on some questions but the public evaluated that and raised her ratings.

Skvernelis: I apologise for jealousy scene was caused by Landsbergis

Invisible Karbauskis: is he loosing leadership or does he not want to be only a „press representative“?