Media Briefing
aA
It is unlikely Prime Minister Saulius Skvernelis expected that a protest of discontent teachers over their wage payment scheme would turn into a protest of thousands in front of the cabinet building. It is now the prime minister’s turn to ponder on how to come to terms with the public sector, otherwise who knows what could happen, the dismissed ministers may not suffice and his own future in the cabinet could come into question. Because assurances that the tax reform will improve public sector staff welfare over three years may very well not work, lrt.lt writes. 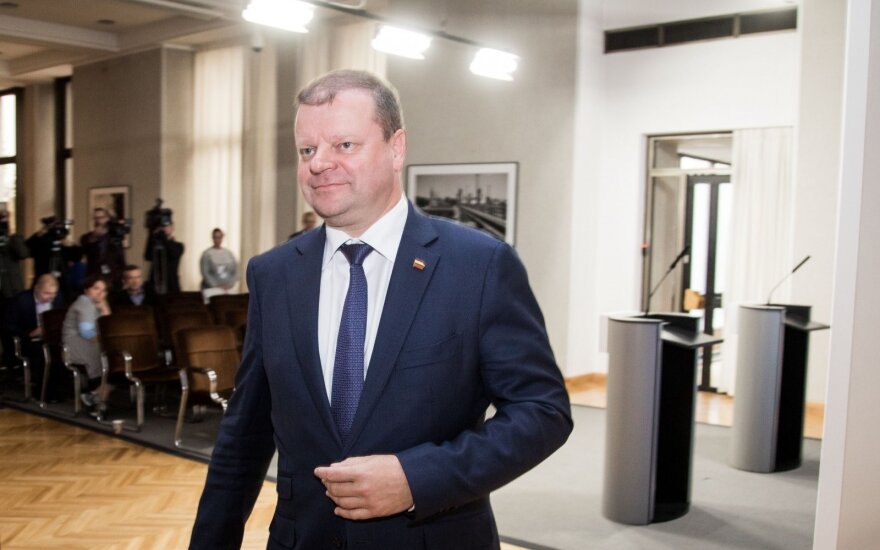 The irked PM reacted emotionally, stating that such protests are the Conservatives implementation of the Kremlin's plans.

Some two and a half years ago, the same trade union organised the largest since independence teachers' strikes and the then Social Democrat government also promised a wage increase programme in three years. Back then, Prime Minister Algirdas Butkevičius also said he had secret information about Russian influence on trade unions. A. Butkevičius had to take back his words and apologise to teachers.

Related articles
Skvernelis’ ultimatum regarding elections: it wouldn’t be just any scandal
PM warns of crisis if parliament fails to approve state budget

Now political analysts also say that the "Farmer" head of government will have to change his rhetoric and get off his high horse or risk exploding himself.

Thousands of people rang the "Last Bell" for the cabinet. Representatives of various areas, more than 40 trade unions, united. Their representatives and thousands of supporters took to the streets.

Everything happened from striking teachers. According to some, they staged a sit in, while according to others, like terrorists occupied the Ministry of Education and Science. With no agreement on further millions from the government, it seems they are not intent on withdrawing.

"We did not come here to spend time and await Christmas – we came for decisions," Panevėžys Vyturys Progymnasium teacher Gintaras Petraitis said.

Blood is now boiling for everyone and it is unclear if just one, even if large, protest will suffice. Teachers, doctors, scientists and officers gathered in one room and realised they are on the same boat – only the leverage and promises received differ.

"Teachers not arriving at work is a massive problem for all of society. That a scientist does not compose a monograph is not going to be felt by everyone. We work for the coming centuries, this is a different sort of capital for the country," Institute of Lithuanian Literature and Folklore trade union representative Lina Leparskienė said.

"The people, who are responsible for changing the content of education must listen to what teachers say," Geography Teachers' Association president Rytas Šalna said.

"Currently our needs are considered. If this continues, the year will be as we planned because every year we have to increase the plan. If not, we will need to seek other means to convince politicians," National Confederation of Officials Trade Unions chairman Vladimiras Banelis stated.

Cultural staff have already stated that current culture financing is grossly inadequate. After a number of protests, an agreement that suits them was not obtained.

With doctors taking to the street a number of times this year, they were promised that their wages would reach 3 average wages in several years, however the doctors themselves are beginning to doubt these promises.

"How is it that the economy is growing, but life is not improving? How long can this continue? Where does that money vanish in the government?" Family Doctors' Trade Union chairwoman Toma Kundrotė asked.

"Things are not fine for people, this is clearly displayed by the teachers. We are glad that there are those, who show the right path. A sort of awakening can be seen in the public," Healthcare Institution Staff Trade Union Solidarity chairwoman Jolanta Keburienė spoke.

With the teachers having taken to the streets, the post of Minister of Education and Science has been freed. At the same time, the heads of the ministers of environment and culture also rolled. However, those remaining in their posts do not really understand the widespread discontent. Apparently, all the problems will soon be resolved by a new workgroup. It will have to prepare proposals in a few months on public sector financing up to 2025. Furthermore, the other commitments the government has made are already being implemented.

"To say that no one is doing anything would be to say that we are not doing what we pledged to. To say that someone won't do something in a few years – these arguments sound odd to me," Minister of Healthcare Aurelijus Veryga was surprised.

"This cabinet has not cheated a single person and has not given any false promises unlike many a politician in this hall," PM S. Skvernelis said.

He blames the Conservatives regarding the various trade unions. Apparently, according to a plan the government has found out about, they are planning to take down the government, potentially with the aid of the Kremlin. After stating it among the Liberal Movement Seimas group, S. Skvernelis repeated it to all of Seimas, "Suspicions certainly arose and we have contacted the [intelligence and law enforcement] services because what is being done by our colleagues looks like the implementation of Kremlin policy. There are also worries on links to Russian special services. I believe that our intelligence services will tell us."

"Every time when discontent arises among the people, the prime minister seeks, who is to blame and the Conservatives are often accused of various fabrications," TS-LKD chairman Gabrielius Landsbergis said.

Meanwhile, experts say that the government should listen up. Up to now, the majority has managed to downplay the teachers' strike, but their attitude has to change. According to analyst Rimvydas Valatka, the problem is S. Skvernelis.

"It is as if he is like a grenade with no safety pin and will explode himself some day, but of course, it is possible to salvage the situation, you just have to get off your high horse and go talk to the people; the problems will be resolved," R. Valatka mused.

"During a critical situation, he is inclined to make hyperbolised decisions, overly inclined to use force because he understands order that way – levied from above with a firm hand and then everyone is silent, everything is calm. He does not comprehend that people continue moving and he is not a Venezuelan police general. He is a former police commissioner of the Republic of Lithuania, a democratic state," analyst Ramūnas Bogdanas said.

"Mr. Karbauskis formulated well that their voters are from the "bottom". It looks good when you go to war with the elites, but when you war with teachers or truly not well of doctors or other public sector employees, it is no longer for the "bottoms", you now become the government. And when you become the government, such active communication that was forgiven earlier now becomes harmful," public relations expert Mykolas Katkus explains.

This time it would appear that to remain in power, the calls will have to be heard. And the majority's task will be even harder – it will no longer be possible to just take from one basket and put in another.

"The greatest advantage is that we all want to be united now," Institute of Lithuanian Literature and Folklore Trade Union representative L. Leparskienė said.

Lithuanian Prime Minister Saulius Skvernelis has warned on Thursday the country would face crisis if...

On Wednesday, Prime Minister Saulius Skvernelis wrote on his Facebook profile, which introduced a...