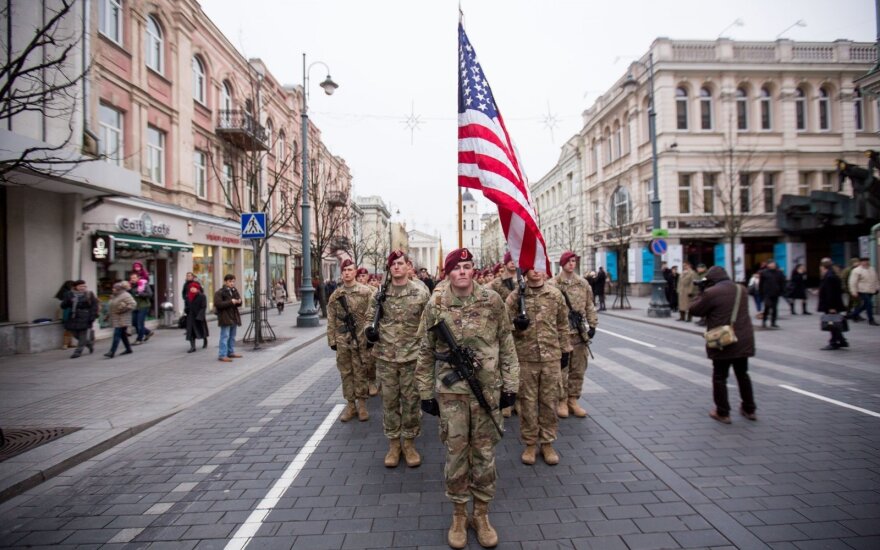 US Troops on the Gediminas Av. in Vilnius
© DELFI / Domantas Pipas

The news that US Special Forces will arrive in Lithuania is not at all directed to the Kremlin, but Lithuania itself, military analyst Darius Antanaitis told LRT Radio.

According to him it is likely that Russia was aware of the deployment for a long time already, thus this act is a signal to Lithuania – the country will receive assistance even after Donald Trump becomes president.

The Ministry of National Defence confirmed with the worsening security situation in the region due to Russian activity, US Special Forces have been stationed in Lithuanian. A few days ago the US newspaper the New York Times wrote about their arrival in the Baltic States, noting that several tens of soldiers arrived in the past few months.

- What does this extra security measure mean, namely the arrival of Special Forces troops in Lithuania?

In fact it is not an extra measure. It is an old one. The difference is that earlier it was not publicised. Special Forces troops, their operations and weaponry are a state secret not only in the United States, but also in Lithuania. Thus just the fact that these forces are in Lithuania is no news. What is new is that this was made public. That is rather unusual.

- What is the function of these troops? Are they a deterrence measure to Russia or does just the fact that US Special Forces are deployed in Lithuania suffice?

First of all we have to realise that US Special Forces are very preoccupied around the world. The first to enter Afghanistan were Special Forces troops. They directed strategic bombers to Taliban fortresses.

Related articles
Lithuania confirms deployment of US special operators
Is the anchor of Baltic States security – Sweden – safe itself?

Being in Lithuania is not some sort of leisure. It is constant preparation. It has to be said that Special Forces troops, both in the US and in Lithuania, perform strategic reconnaissance. What does this mean? It means that they detect certain general threats to the state. They also point out primary targets which need to be destroyed prior to an invasion commencing.

Special Ops troops perform reconnaissance, but they are also authorised to direct strategic rockets, ballistic rockets, winged rockets and bombers to their targets. The presence of their Special Forces means we can expect strategic level assistance from the United States.

- What message does this send to the Kremlin?

I believe the Kremlin has long been aware. This message is likely intended for us and only partly for the Kremlin. First of all we are rather concerned due to the election of Donald Trump as US president.

The truth is that while there is much negative coverage of D. Trump, the United States is not one person. It is a democratic state, thus this message is likely more intended for us – the US was, is and will be our reliable partner and will aid us if need be.

- D. Trump’s inauguration on January 20 is nearing. How much is Donald Trump’s appointment expected to change the US’ stance toward this and other security measures used in the Baltic States and Poland?

US politics are far more profound than just elections, discussions and announcements. The United States has a constant and stable policy line, thus if we are to speak of expected changes, I would guess it would be to the better.

Looking at Trump and his statements it is clear that he will strengthen the military. With more attention dedicated to the armed forces and the Baltics with Poland being core states in the Baltic region, I view the future as promising.

- Only the best troops are part of the Special Forces. The Americans are known for it around the world. Where is the intrigue?

As I mentioned, Special Ops troops, particularly those of the US are very preoccupied across the world, thus they are not deployed needlessly. The intrigue is that a combat detachment is going to be here. These are troops who not only know how to fight, but also employ these skills.

Currently they are fighting in Iraq, Afghanistan and other countries around the world. Special Ops troops being present with us and the sending of this message is just another signal that we will receive aid, that we should not panic and should continue to improve our capacities and the Americans would assist us. It is most important not to stray off the current path.

- The paths of Lithuanian and American Special Forces have most likely crossed. What can Lithuanian troops teach their American counterparts? They are after all operating in different geographic areas.

The Lithuanian military Special Forces are among the best in the world. These are troops who have fought and can fight in hostile environments with no support. With this we, our troops are special.

- Once more about revealing information. Why is such information being “dosed”? The troops arrived significantly earlier than announced, it was not announced what they are exactly doing, how many of them there are and such. Other intelligence entities are not dozing off after all.

Perhaps I will draw away from the topic. The State Security Department releases announcements and urges to report suspicious connections. This is not some minor issue. Hostile intelligence agencies have a strong presence in Lithuania. I believe Russia was aware of the arrival of US Special Forces in Lithuania. It knew this ahead of time, now it was simply pointed out directly – look, we are here and we will continue to be. I believe that is the sort of message that was sent.

After the Russia n actions changed the security situation in Lithuania for the worse, troops of the...

Is the anchor of Baltic States security – Sweden – safe itself?

Minister of Defence hopes all recruits to join voluntarily in 2017

Lithuania's Defence Minister Raimundas Karoblis hopes that all recruits will join the country's...

Around 400 Lithuanian troops this month are starting their standby duty in the NATO Response Force...