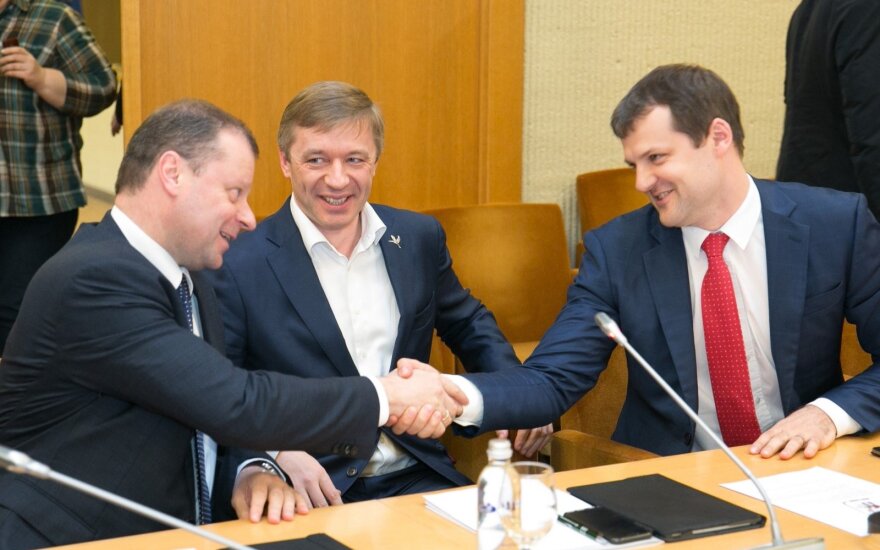 Chairman of the Lithuanian Farmers and Greens Union (LVŽS) Ramūnas Karbauskis isn't backing down: will demand that the Social Democrats support all the proposed restrictions on the alcohol sales. Otherwise, R. Karbauskis warns that there will be questions about the fate of the coalition.

The amendments for the Alcohol Control Act that were presented by the Government are being considered by the Parliament. There was some dissatisfaction form the society about some of the proposed restrictions. On Tuesday, a huge concert "Freedom to rock'n'roll" held near the Parliament.

Related articles
Govt coalition's fate may hinge on vote on alcohol restrictions - Karbauskis
Conservatives on counter attack: do we still have a Government

Conservative leader Gabrielius Landsbergis and Social Democratic leader Gintautas Paluckas promises to support some Farmer proposals to the Parliament but won't support others like a ban on selling alcohol in outdoor cafés. The Social Democrats also oppose the proposal to allow to sell alcohol from 20 years only.

K. Karbauskis doesn't intend to back down. According to K. Karbauskis the proposals are already a compromise: the election program of the party was even harsher.

"The expressions whether they have "common sense" or not are just showing of for an audience. In fact, the situation is tragic, if we look at the amount alcohol consumed by men, who talk a lot right now, they don't feel any responsibility and don't realize that all of our proposed suggestions are from the World Health Organization and are not over the top" said R. Karbauskis to DELFI.

He says that the limitations would affect events, where there is no control, where "hundreds of poor policemen" have to catch people that violate public order. R. Karbauskis said that 12 municipalities have already tried to have alcohol-free events and wouldn't want to go back, no one went bankrupt, and those that want to drink do it at home. Politician states that there is no need to make festivals a watering place.

"I understand that these two young party leaders like pop, rock, and according to their mood can suddenly forget what they have suggested, after the children that were drowned in Saviečiai. Men do not understand and don't try to understand here" is angry that G. Landsbergis and G. Paluckas don't support at all of the proposals.

It seems that by doing this, they seek to please a part of society, which encouraged the Parliament to legalize marijuana.

"Today I am confident that the Government will be able to take the decisions approved by the Committee despite the statements by party leaders in the public. It's very important for us. I said openly and I can repeat it: the fate of the coalition may depend on this vote. It's a big responsibility. This is not a question of agreement but responsibility" said the leader of LVŽS.

According to R. Karbauskis, a complex solution is needed: it's not impossible to make one decision after rejecting three. "If the Social Democrats won't approve, this question may arise because we just don't understand. It's included in the Government program" the leader of the LVŽS warns about the threat to the stability.

G. Paluckas: nearly everyone disagrees with the Farmer proposal

The Social Presidium had a meeting on Thursday suggested the members of the group to oppose the proposal to raise the age of sale of alcohol to 20 years, and apply different requirements in the fees in paid and free events as well as ban sales in outdoor cafes.

"I think a lot of groups will agree on that. There are 20 per cent of proposals, which are opposed by nearly everyone, and everyone agrees on about 80 per cent. Apparently, we should focus on what we agree on and would vote in favour by mutual consent or by absolute majority but leave the disagreements for the upcoming period" said G. Paluckas.

Social Democratic leader says that public discontent began when a green project, which was not discussed in the coalition, was made public. This was followed by comments, proposals, and a discontent in society. "A lot of maximum restrictions were thrown out. I think even the organizers didn't expect for everything to be accepted. Politics can be carried out like this but it can be done a little more constructively" criticized G. Paluckas.

G. Landsbergis: it's a personal battle of R. Karbauskis

On Friday Homeland Union-Lithuanian Christian Democrats (TS-LKD) registered their own amendments to the Alcohol Control Law. As it was announced earlier, the group is ready to support the limitations on time of alcohol sales, limiting advertising but disagree that the ban on advertising should be absolute.

The Conservatives don't intend to accept a ban on the sales of alcohol in outdoor cafes and the ban to sell alcohol at free events and town celebrations. They propose to leave the control to municipalities. TS-LKD Group can't accept "illogical suggestions to ban transport and store alcohol in packages visible in public places". Conservatives doubt also raising the age limit of selling of alcohol to 20 years.

"I think this is a document that has been compromised and it could be supported by almost all political groups. Everything was negotiated in the Parliament to a point, the most position are the same. However, the opinions may divide on the question of age. We suggest to move away from the 20-year provision proposed by Farmers and offer a compromise that would divide according to strength" explained TS-LKD leader G. Landsbergis.

According to this proposal, alcohol up to 16 degrees would be sold to people of 18-20 years.

If all parties agree then why did Farmers Greens scoff?

"It's hard to explain. Yesterday I didn't understand the Prime Minister's statements, he said that they would support a more liberal version. Maybe he'll vote for our proposal? I think this is the personal struggle of R. Karbauskis, demonstration of principles, maybe the last citadel, which he tried to save. However, it won't happen that way, you can't stomp your foot and wait for the whole parliament for your amendments. Of course, then he tried to blame us but it doesn't help because the truth is on this side" says G. Landsbergis.

A. Katauskas: Farmers Greens are pushed into a corner

Arijus Katauskas, a public relations specialist, said that Conservatives stated the fight with alcohol consumption. Now the rhetoric was taken over by LVŽS. The Farmer Green politicians that are talking publicly presented a very categorical position.

"I think that the opponents, with the whole freedom of rock'n'roll in the current battle have defeated the Greens. What is proposed by the Conservatives and Social Democrats is an obvious show that the Greens have put themselves into a corner. If they opposed even a partial restriction that is suggested by conservatives or social democrats there's no doubt that there will be a discussion whether activity and the fight against alcohol is just being imitated. This will be communicated by Social Democrats and G. Landsbergis.

A. Katauskas assesses that the set position of Farmers Greens made the opponents active and as soon as the Green start losing the war, they immediately lose one of the messages that helped them win the elections.

Now he believes that it's a great opportunity to achieve a new victory for the leader of Social Democrats G. Paluckas. At the same time, A. Katauskas thinks that the Conservatives, are trying to show that Farmers Greens have crossed the line of common sense.