Jurgita Čepulytė
aA
Based on the newest data from Eurobarometer, of all the EU member states, Lithuanians trust the Union the most. Almost 80% of the citizens agree with closer integration. Lithuania was especially happy with Pope Francis’ advice to “become a bridge between East and West Europe.” 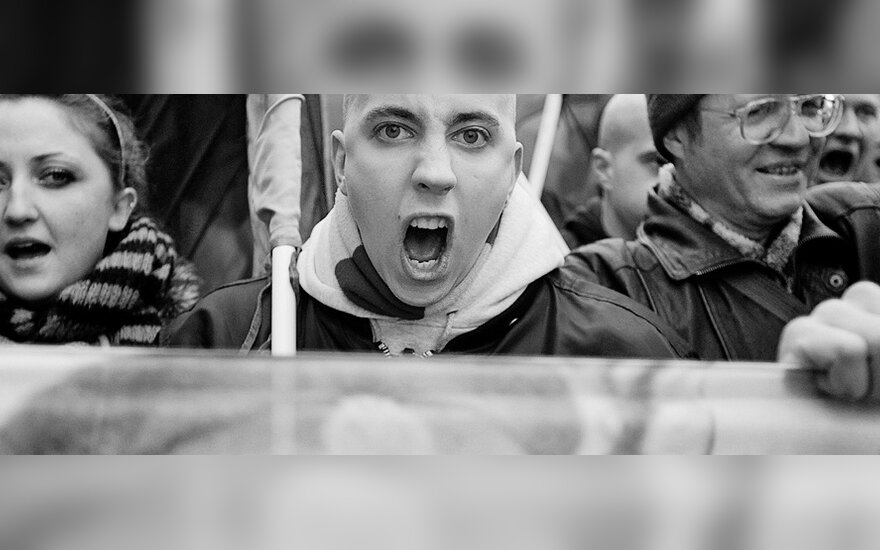 With such European euphoria continuing, the US based Pew Research Centre has published scandalous data – Lithuania, according to them, radically differs from Western Europe and does not accept the liberal values of the EU. Political scientist Linas Kojala and sociologist Vladas Gaidys explain that an accurate reading of the Americans' message is only possible when you understand the Lithuanian context.

The Pew Research Centre has performed close monitoring of Europe for the past four years, interviewing some 56 thousand Europeans aged older than 18 in 34 Western, Central and Eastern European countries.

The verdict is ruthless – despite 29 years passing since the fall of the Iron Curtain, the Old Continent is now split by questions of respect of diversity, discrimination, refugees and other matters. The researchers have found difficulty drawing separation between Western, Central and Eastern Europe, however Lithuania's results become a sort of shameful point for Lithuania, with the country's ratings being particularly "Eastern" and radically different from the West's.

The survey has revealed extreme difference of opinion in the European Union, with less than half of respondents in almost all Central and Eastern European countries being willing to accept a Muslim as a family member, while in the West – more than half would agree. Based on the survey data, the most tolerant countries are Holland, Denmark and Sweden, while the least tolerant are the Czech Republic, Lithuania and Latvia.

Another East-West divide is cultural chauvinism. Researchers asked Europeans whether they agree with the statement "Our people are not perfect, however our culture is superior to others." While there were exceptions, citizens of Central and Eastern Europe were more convinced of their culture's superiority. They also state that "a real Romanian, Greek or Bulgarian" should be born in the country, their parents should also stem from it. In these matters, Lithuanians are often alongside the French, who are called the nationalists of Europe – an entire 37% of interviewed Lithuanians favoured the cultural chauvinist view.

Central and Eastern Europeans are far more inclined to believe in fate than Westerners, believing that their lives are fated. Among EU countries, such beliefs are particularly prominent in Latvia, Bulgaria and Lithuania. According to the Americans, in Lithuania, 68% of residents believe in fate and every second – in curses. Such results pair Lithuania with Latin American and sub-Saharan African countries.

This is not the only Lithuanian anti-record. Most Western Europeans agree with same sex marriage and celebrate the legalisation of such practices. The attitudes in Central and Western Europe are contrary – in almost all the countries researched, most citizens are against legal gay and lesbian marriage. Even among such countries, Lithuania stands out – based on the surveys, 85% of Lithuanians are against such marriages, with only a meagre 12% supporting them. Estonia is far more favourable toward it (23% in favour) and even the Catholic Poland is as well (32% in favour).

The Americans' results surprised sociologist Vladas Gaidys – the expert has been monitoring changes in Lithuania for years and says he has not had such findings. However, he has an answer to such results.

"Most such opinions are linked to two geographical axes – from North to South and from West to East. The first axis is the move from Protestant culture to Catholic. Protestant individualism, personal freedom in the North shapes the perception that you are the master of your own fate. Thus, in protestant culture the opinions on non-traditional sexual orientation are more favourable. In terms of the West-East axis, we must remember the difference between democratic and totalitarian, post-Soviet societies. This divide between West and East existed a thousand years ago and it remains now," the sociologist stated, also noting that Lithuanians are "moving from the countryside to the city."

"The value orientations are strongly linked with the city-countryside axis. The countryside has a moment of collectivism, while the city – individualism. Lithuania is of a strong rural nature. After all, the question of whether you were born in the countryside is positively answered by more than half the respondents. What to even talk of their parents. This is decisive in the answers of certain questions," V. Gaidys pointed out.

Furthermore, the expert points out that political correctness has not fully taken root in Lithuania and in comparison, not all Western answers can be expected to be fully earnest.

"Real behaviours, if we are to talk of sexual minorities, do not display any bad views. I do not see any problem with nationalism either. After all, in Seimas we do not have a single nationalist representative. These days, with all the talks of immigration, just go and play with such topics! But they have nothing despite trying. These things do not work in our reality," the expert defends Lithuanians.

Political scientist Linas Kojala responds to the unpleasant image of Lithuania by offering to remain critical because this is only one research centre's data. He points out that the Lithuanian public has become more courageous in terms of self-expression, more open and more receptive to other cultures and traditions over the past fifteen years despite half a century behind the Iron Curtain, which left scars, which will last a long time. Furthermore, he notes that a number of parties have risen in the West, which present both immigration and certain religions as a threat, thus the distinctions should not be made without considering nuance.

L. Kojala also highlights that the US researchers' message will not have a significant impact on Lithuania's international image because survey data does not decide country perception. It is mostly formed by people who witness the country and live there.

"In terms of foreigners, we typically hear positive responses, often surprise, expectation of something worse. Meanwhile, the long time stereotypes such as Eastern European backwardness, poverty, corruption and such will take longer to overcome. After all the formation of this began even before the division of the Commonwealth," the expert stated, noting that such information could even benefit Lithuanians, spurring on internal debate on who we are and wish to become.