Dainora Pociūtė | ldkistorija.lt
The Spaniard Alfonso Salmerón (1515–1585) was one of the closest companions of Ignatius Loyola, the founder of the Society of Jesus, and he played an active role in the affairs of the order in its early life in Paris and later in Italy. Salmerón and Loyola met at the Sorbonne in 1536, where they were studying theology. Not long afterwards, with a few other friends, they founded the Society of Jesus. 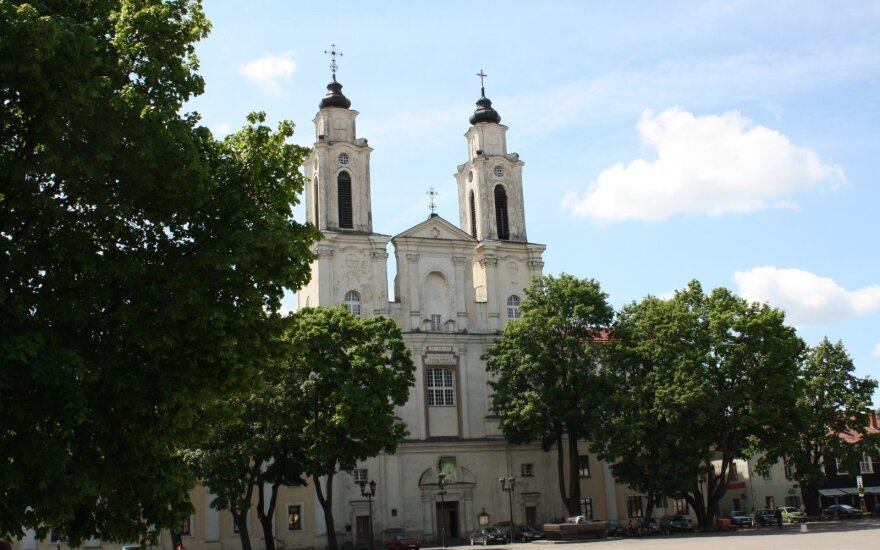 Salmerón worked for a while in Siena in Italy, and in 1541, Pope Paul III appointed him as papal nuncio to Ireland and Scotland. He soon returned to Italy, where he continued to participate in Church affairs, and gained a doctorate in theology from the University of Bologna. He took part in the Council of Trent, helped Loyola draw up regulations for the Jesuits, and oversaw the opening of the new Jesuit college in Naples in 1551. From 1558 until his death, he worked mostly in Naples as the first Jesuit provincial. Salmerón was interested in theology, and left a large legacy of theological writings, and many commentaries on the Holy Scriptures.

In his capacity as a theologian at the Council of Trent and an opponent of the Reformation, Salmerón was the first Jesuit to visit Vilnius, where he came to explore the possibility of setting up Jesuit operations in the capital of the Grand Duchy of Lithuania. He stayed from the middle of October till the end of November 1555, at the same time that the Vatican's first papal nunciature in the history of Poland and Lithuania was being set up. In January 1555, Pope Julius III had appointed the Bishop of Verona, Aloisio Lippomano (1496–1559), papal nuncio to Poland and Lithuania. His main task was to stem the threat and the rapid spread of the Reformation in these countries, and to persuade the king, Sigismund Augustus, who had shown some interest in the Reformation, to turn back the Protestant reforms that the state had undertaken. Lippomano immediately asked the Vatican to appoint Salmerón as one of his helpers in the nunciature.

A famous cleric plunged into a country of barbarians and heretics

The envoy was instructed to steer the king away from his stance towards the Reformation, so his mission involved visiting the royal residence. Leaving Italy at the end of the summer of 1555, he stopped in Augsburg on his way. While he was staying in the palace of King Ferdinand Habsburg, the King of Hungary, Croatia and Slovenia, and the brother of the Holy Roman Emperor Charles V, it was announced that the envoy would be based not in Poland, but in Vilnius. Sigismund Augustus, the King of Poland and Grand Duke of Lithuania, who was well known for not wanting to live in Krakow, had been living in the royal palace in Vilnius since the middle of the summer, and was not going to leave it for at least half a year. Lippomano took the news badly when he heard that he would not go to Krakow, but would have to go to the king in Vilnius 'with real barbarians, to the edge of the world', as he wrote in a letter to Cardinal Carlo Carafa. However, he did not turn back.

The first religious activities of the Jesuits in Poland and Lithuania were compared to the missions and evangelisation of distant countries of the non-Christian Far East. For this reason, early Jesuit reports often called Lithuania 'India'. The information coming from the region was largely negative; what made a mark on visitors was the simple houses and the weather. The country was considered to be a small Christian 'Babel', also inhabited by Orthodox and Muslims, and it was percieved as one of the most heretical parts of Europe, because of the spread of the ideas of the Reformation. For this reason, Lippomano, who was not young, and his Jesuit companion, saw their mission as a great feat and a deep personal sacrifice for the good of the Church. They set out with a great deal of superstition and fear, and hoped to return home quickly.

At Ferdinand Habsburg's court, the envoys received a lot of news. They were assured that Sigismund Augustus was 'closed to religious reform' (namely the Reformation, and particularly the proposals to receive communion in two forms, and to allow priests to marry). Ferdinand Habsburg hinted that Mikalojus Radvila the Black, who was the closest person in the country to the king, had demonstrated Protestant behaviour in public and was 'a great heretic'.

Letters to Loyola: being in Vilnius was comparable to martyrdom

Lippomano and Salmerón left Augsburg on 7 September 1555, and travelled to Vilnius through Bohemia, Silesia and Warsaw. They reached Warsaw on 8 October after a difficult journey 'through endless heretical provinces'. There they met the deposed Queen Bona Sforza, who was returning to Italy, and Lippomano immediately expressed his desire to travel together with her devoted guide. Leaving Warsaw for Vilnius with Bona Sforza's guide, who looked after their lodgings, the two envoys reached the capital of the Grand Duchy of Lithuania on 14 October.

They stayed in the palace of the Bishop of Vilnius, Paulius Alšėniškis, who had died in September that year. Three surviving letters in Spanish from Salmerón telling us about his visit to Vilnius are interesting, because he wrote them to his close companion Ignatius Loyola, the founder of the Jesuits. The first was written in Augsburg on 1 September 1555, after he had spent ten days there. In the letter, the Spaniard discusses his hopes of quickly founding a Jesuit college and soon returning home. The second letter was written after he reached Warsaw on 10 October. In it, he acknowledges Queen Bona Sforza's offer of money, which he put towards founding the college.

The third letter to Loyola was written on 1 January 1556, after he had left Vilnius and reached Vienna. It gives a lot of information about the experiences of the first Jesuit in the capital of the Grand Duchy of Lithuania. Salmerón was accompanied to Vilnius by the Jesuit Godfrid Cervati (ca. 1530–1593), whom he referred to as Chofrė in the letter, and to whom the Vilnius winter was as much a trial as to Salmerón. His impressions of Vilnius were negative. He tries to explain to Loyola the reasons for his hurried departure from the city, pointing out that he had been brought to Vienna by the nuncio, who had stayed in Vilnius until 28 December. He is not hopeful about the possibility of setting up a college, and he writes how he would regard any possible order to send him back to Poland or Lithuania as torture.

Although Salmerón avoids accusing Sigismund Augustus directly, we can see from the letter that the main blame for the spread of the new religious ideas was laid at the door of the king, who was not even interested in Salmerón's offer of sermons in Italian. There is no shortage of wit in his letters, or even of auto-irony. The first Vilnius Jesuit describes the tribulations involved in making a journey to the 'eastern corner' in the following way: 'Man can redeem his sins by offering repentance or even receiving a plenary indulgence, and that's what these inconveniences are equal to.'