Airbrushed out of history in the USSR - Part 1

Ludo Segers | the Lithuania Tribune
aA
Some believe that photo manipulation started with Photoshop some 25 years ago. In fact, as early as 1846, when the first negatives were created, image altering took off. People and objects appeared and disappeared in photos. Photographic images acquired new meanings and 'truth' with the help of scissors, some ink, acid, and, eventually, airbrushes. 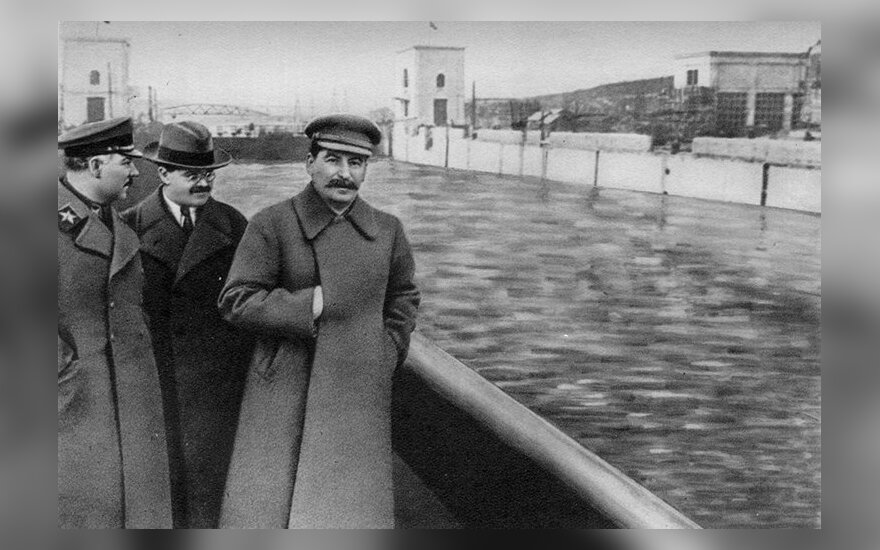 A favourite line from the Russian propaganda manual is that nobody knows the truth and therefore lying and deceiving is another form of fact. The fictional 'Ministry of Truth' in George Orwell's 1984, probably did not require a lot of invention, as producing new versions of 'the truth' had already been perfected and used for decades in the USSR at the time of Orwell's writing.

Much of the manipulation of photos and information in the USSR only became known after the empire had collapsed. Altering images to adorn the facts and lie to the people took hold right after the October revolution. Some of the pictures taken during the Bolshevik revolution of fighters celebrating their victories were transformed into postcards after the war, undergoing telling alterations in the process.

Here is a postcard (bottom) made from a photo (top) taken in November 1917. 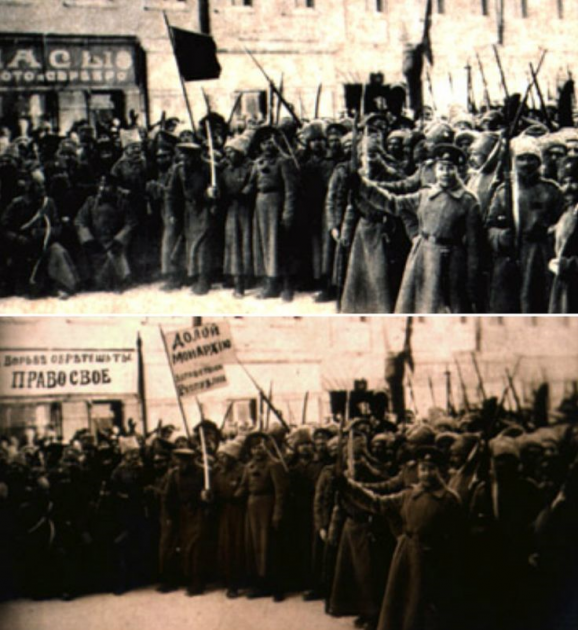 The background of the original photo includes a jewellery shop with a Russian sign saying "Watches, gold and silver".

The inscription was then altered to "Struggle for your rights", and a near solid (red coloured) flag changed to to a placard saying "Down with the monarchy - long live the Republic!" Obviously jewellery was not something available to most living in Russia in 1917. Pretty bourgeois perhaps too in the eyes of Lenin and his cohorts. The troops had already murdered the Tsar and its family. Stating that fact on the flag, which in a monochrome version did not look red (their symbol), was a mere confirmation of a crime that had already taken place, but served the revolution.

Stalin... and then there was the One

Sometimes, one image underwent numerous alterations in the course of ideological weather change. In the image above, we see, initially, standing from left to right Nikolay Antipov (People's Commissar for Posts and Telegraphs of the USSR), Joseph Stalin, Sergei Kirov and Nikolay Shvernik. After each of Stalin's comrades fell out of favour, they were removed from the picture. Eventually, only Joseph himself is left standing, embellished in the process and finally coloured in by Russian photo artists. 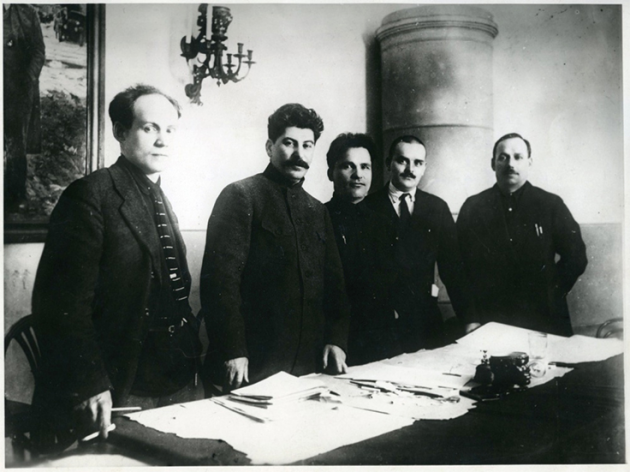 The original photo from 1926 saw Nikolay Komarov (who was at the extreme right) already cropped out of the top left photo. 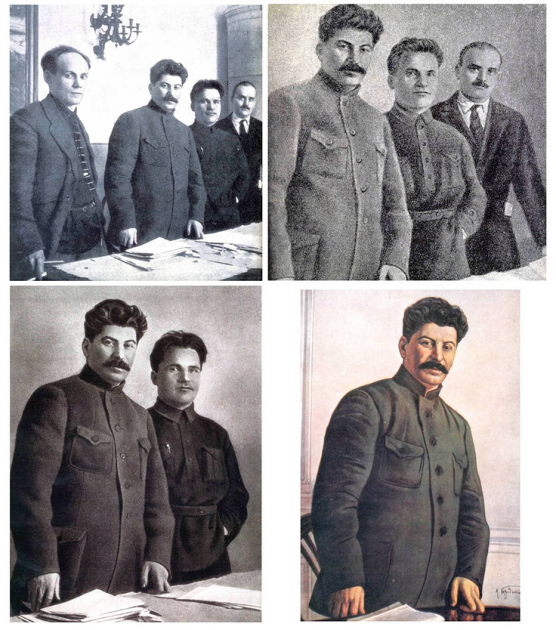 Nikolai Yezhov
Yezhov earned the nickname 'The Vanishing Commissar' among art historians for his disappearance from photographs after his execution in 1940. Below is the original photo of Soviet leaders posing by the Moscow canal. Some may recognise the man to Stalin's left, Vyacheslav Molotov, infamous for the pact with Nazi Germany's Ribbentrop that precipitated the brutal invasion of the Baltic States and Poland. 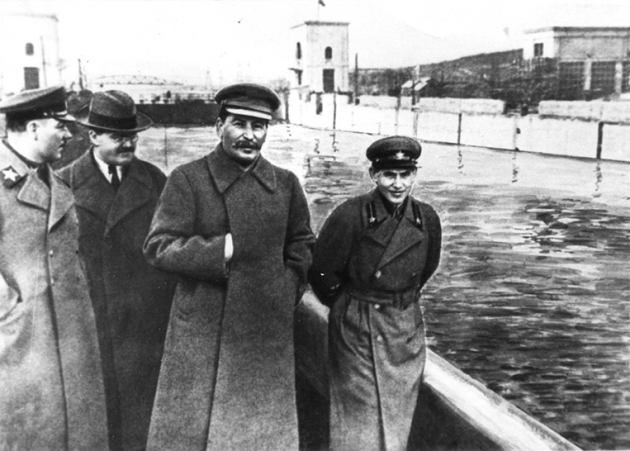 Yezhov, a particularly cruel and brutal man, was the Chairman of the Central Commission for Party Control from 1935 until his arrest in 1939. In 1935, he wrote a paper in which he argued that political opposition must eventually lead to violence and terrorism; this became in part the ideological justification for Stalin's 1930s purges. 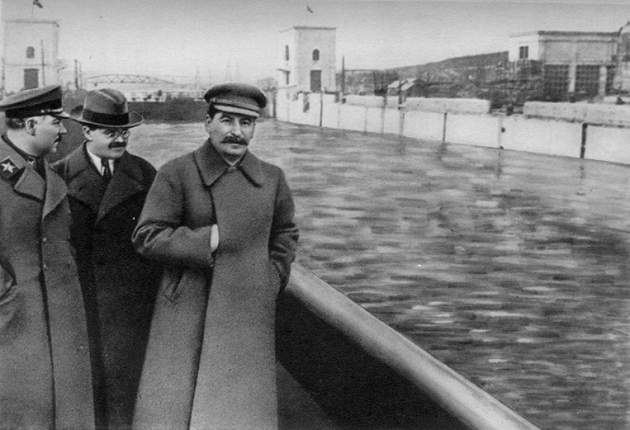 Yezhov's doctrine was responsible for killing hundreds of thousands, including about half of the Soviet political and military establishment suspected of disloyalty or 'wrecking'. They were arrested, imprisoned or shot. 'Wrecking' or sabotaging the government was an easy 'of the shelf' accusation during Stalin's reign of terror.

Ironically, Yezhov himself was eventually accused of 'excesses' and disloyalty. He was arrested on 10 April 1939 and executed on 4 February 1940. Stalin, who was in the habit of eliminating those who fell out of his grace not just physically, but out of official memory, had him airbrushed out of history.

All pictures fall under Public Domain, being published prior to 1 January 1954.
All works belonging to the former Soviet government or other Soviet legal entities published before 1 January 1954 are in the public domain in Russia.

Motives behind recognising the Communist Party as a criminal organisation

The Seimas of the Republic of Lithuania, on June 26 adopted a Resolution recognising the Lithuanian...