After Putin's victory, Kremlin propaganda turns to Lithuania: you're unwanted, even the US will betray you 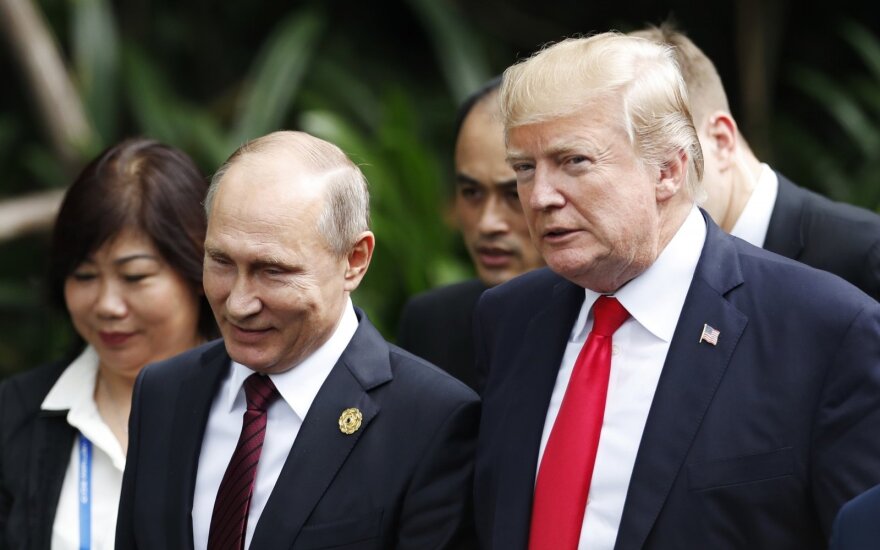 After the announcement of Vladimir Putin's landslide victory in the first round of the Russian presidential elections, many analysts wonder what comes next. What will Russian foreign policy be like? For example, Kremlin information outlets are already triumphantly proclaiming the economic and political isolation of the Baltic States. Or perhaps something even worse.

A peculiar dual view of the Baltic States could be observed in Russia for the past few years. On one hand, there are efforts to emphasise that the "NATO military infrastructure near Russian borders is a threat to Russia."

That NATO deployed modest defensive forces in Lithuania, Latvia and Estonia, a multinational battalion in each country while Russia has amassed at least ten times the forces near the Baltics, is no obstacle to Kremlin expressing discontent and speaking of "retaliatory measures." For example the Iskander ballistic missiles, new detachments equipped with modern weaponry and equipment in the Western military district.

At the same time, a different narrative could be observed emanating from Russia for a number of years – weak, small, impoverished and unwanted marionettes maintained by the West, which apparently hold no interest for Russia. They are at the bottom of the list of priorities, warrant no attention. Supposedly the only reason for Russia to speak up is the rampant Russophobia and breaches of Russian language speakers' rights in the Baltic States. Otherwise they are of no interest to anyone.

A similar opinion could be heard in St. Petersburg already before the elections. In an interview with Delfi, Dmitri Solonikov assured that the Baltic States apparently are and will continue to be hostages of the intensifying antagonism between Russia and the West.

The director of the Modern State Development Institute is a frequent guest speaker for the Kremlin propaganda outlet Sputnik. And while as a sociologist he tries to formally emphasise his neutrality, in Russia D. Solonikov is known as a pro-Kremlin expert.

"Russia has no plans to attack the Baltic States even in your worst nightmares. These countries have long departed the centre of Russian foreign policy attention. There is this Foreign Policy Concept – a document, which the Foreign Ministry releases every three years.

At the end of the last century, several pages of this document were dedicated to the Baltic States. In its latest incarnation a year and a half ago, the Baltic States weren't even mentioned. This reveals the Baltic States' place in Russian foreign policy – completely none," D. Solonikov stated.

Anton Muchin, who is an analyst for the Gorod 812 publication and also participated in the discussion, assured that the Russian confrontation with the West was chosen in the Kremlin in order to unite the Russian nation. As such, it is unwise to evaluate Russian foreign policy based on official Foreign Ministry documents. This especially being the case where decision making, including impulsive decision making, is done by V. Putin and his entourage.

"The impression arises that the confrontation with the West is based on V. Putin's personal gripes. This could also impact the Baltic States. When earlier it was needed to unite the Russian people, a myth was presented about fascist rampages in the Baltics, take the story of the Bronze Warrior for example," the analyst warned.

Intimidating with isolation and war

Nevertheless, the narratives that the Baltic States are unwanted, but at the same time could become the source of conflict have not vanished from Kremlin information channels even after the presidential elections.

For example the Russian propaganda outlet for the Baltics rubaltic.ru published an article by Alexander Nosovich, who frequently comments negatively on the Baltic States. The claim is made in the article that Russian policy toward the Baltics will remain unchanged.

"Lithuania, Latvia and Estonia will be ignored at the political level and economic links will also be difficult. Moscow's policy could only change when the US chooses to use the "Baltic Card" in its satellite states in order to provoke Russia," the article claims.

It also emphasises the Foreign Policy Concept document mentioned by D. Solonikov, which has no mention of the Baltics in 2016.

At the same time the author stresses that with V. Putin coming to power, Russia made steps in order to "reduce its dependency on Lithuanian, Latvian and Estonian ports, electrical networks and other infrastructural projects." This is apparently proven by the "successful energy projects" of the electricity plants in Kaliningrad and Astravyets, as well as the Ust Luga port near the Estonian border.

"The anti-Russian policies of Lithuania, Latvia and Estonia within the EU and NATO, blocking dialogue with Moscow, historical pretences, war against monuments, spying mania and paranoia in domestic policy, blacklists and deportations, public insults toward Russia and its president – the long this continues, the less there will be to talk about with the Baltic neighbours," the Kremlin outlet wrote.

According to it, leaving the Baltic States isolated, which is apparently a task of state importance, which was mentioned by V. Putin himself a number of times, Lithuania, Latvia and Estonia will also be cut off from transit from China. Nevertheless the article takes another angle as well. Apparently in recent years, Western countries have been forced to militarise the Baltics and draw NATO military infrastructure toward the Russian border.

Under the conditions of the New Cold War, the Americans can always draw the Baltic card and deploy nuclear weapons or influence one of the countries to provoke Russia.

The US needs the Baltic States as a bargaining chip in Russian-American relations, which is why the United States is increasing the significance of the Baltics for Russia – increasing amounts of weaponry are sent so that later Lithuania, Latvia and Estonia could be traded to Russia for concessions in more important areas," rubaltic.ru claimed.

According to the author, such a paradoxical situation where the Kremlin apparently refuses to pay attention to the Baltics and the Americans provoke the Russians with their actions could be very dangerous.

"We should speak with those pulling the strings, not the marionettes. The Baltic States will become a part of the formula of an agreement between the US and Russia, but the militarisation of these countries is raising the bets, which could lead to direct military confrontation in the region," the author warned.

Russia has no reason to fear such a confrontation, it would perhaps even benefit from it. The Russians, as V. Putin himself claimed, have already created impressive counteragents – weaponry with no analogue in the world and which will make Russia invincible. However the Baltic States will suffer first.

"Thus the leaders of the Baltic States should carefully consider this before agreeing to provocations against Russia. That said, those countries are not freely responsible for their fate – directions are handed down from the other side of the window," the author mocked.

It is no coincidence that such thoughts, even if they are the expression of one Kremlin propaganda outlet, Nerijus Maliukevičius says. The Vilnius University Institute of International Relations and Political science lecturer, who researches information wars, believes that such a narrative has long existed in Russia, is constantly repeated and supported from the highest levels.

"The main thesis is that we are not independent, we are marionettes of the EU or the American military industry. Furthermore we are also fringe states – this leitmotif is visible in the rubaltic.ru text. The text itself appeared, as often is the case, after an important event – the presidential elections," N. Maliukevičius stressed. He also pointed out that the most important part of the text is not the insults, but the urging to "give thought."

"Such intimidation, trying to convey that we are not independent and will take up military provocations against Russia is easy blackmail – here's what will happen if you do not listen to us.

This topic is directed at not just us, but also matches the "sovereign democracy" concept established in Russia. What matters is that you would be independent from Western or any other influence.

And who are those marionettes, which rolled away and can be manipulated? The Baltics and Ukraine," N. Maliukevičius stated.

He also highlighted that the article on rubaltic.ru appeared right after an interview by scandalous director Rimas Tuminas, where he echoed the same phrases linked to Kremlin propaganda narratives: "we should leave the EU", "we should make a union with Latvia and Estonia, align with the Scandinavian states", "What of it, if we buy two tanks?"

"I am unsurprised because he lives in that information bubble and I am unsure whether he realises he is rebroadcasting those narratives to a rationally thinking audience," N. Maliukevičius stated.

The reaction of the Baltic states on re-election of Vladimir Putin as Russia 's president has split...

The Lithuanian State Defence Council will discuss the country's priority defen c e needs at its...

85 percent of Russian citizens in Lithuania voted for Putin – embassy

Less than half of eligible Russian voters in Lithuania cast ballots in the Sunday's Russian...