After a blow to the cabinet – increasingly bad scenarios 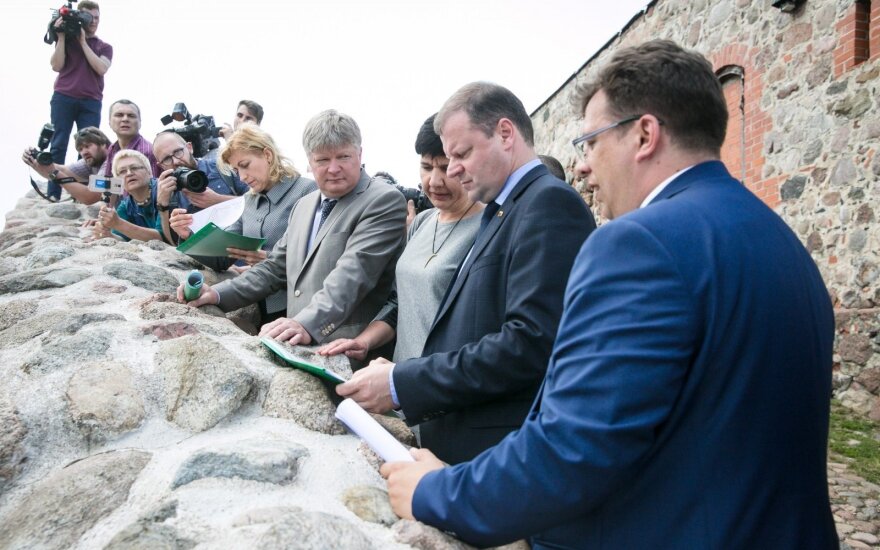 Saulius Skvernelis' cabinet is opposed not only by the partner Social Democrats, but also a number of allies. The cabinet is operating in isolation without support in Seimas and this situation can no longer even be called a minority government, political scientists say.

With the backing of not only the opposition, but also some members of the majority, last Friday the Seimas Committee of Environmental Protection blocked the cabinet's forestry reform which is seen as one of its major works. For this, criticism was directed at the Social Democrat partners who supposedly accomplished their goals through the hands of others.

Related articles
Presidential elections: Grybauskaitė‘s influence and whether Skvernelis can win
A blow to the cabinet – opposition performs an unexpected manoeuvre

The Committee of Environmental Protection did not choose to propose the cabinet's forestry reform model for Seimas consideration, which would have merged the current 42 forestries into a single state company. Instead the proposal of Liberal Movement representative Simonas Gentvilas and Conservative Paulius Saudargas, written just a few hours prior to the meeting, was passed, which delays the potential merger by at least two years. A similar project was earlier suggested by the Social Democrats, who stated that they would not support the reform if their model is not passed.

Representatives of the majority Lithuanian Farmer and Greens Union (LVŽS) have called their partners' actions a betrayal in unofficial discussions and are considering whether this is how the SocDems intend to terminate the coalition agreement between them, leaving the "Farmers" alone to answer for the stalled reforms. Especially when the Lithuanian Social Democrat Party (LSDP) chairman Gintautas Paluckas hinted last week about potential "decisive choices" in September, when the Seimas reconvenes – this statement has been interpreted as a potential initiative for reviewing the coalition agreement.

Work in the minority – particularly inconvenient

With hints appearing that the "Farmers" may be left with a minority cabinet, the likelihood of this was confirmed in a Delfi discussion with Vytautas Magnus University professor Lauras Bielinis.

"But the Social Democrat withdrawal must not be excessively rapid, an immediate process. This is a long term act because there are many links, dependencies, many positions handed out. It is clear that the Social Democrats are distancing from the "Farmers". Likely there is an idea or ideas of splitting up, but how to do it without hampering many of the processes happening in the country? How to do it so that it looks politically favourable (for the Social Democrats – Delfi)? We will see what they decide," the political scientist said.

When asked about hints from certain LVŽS representatives that their party should withdraw from government, giving way to the Homeland Union – Lithuanian Christian Democrats (TS-LKD), who the current government is inclined to blame for most of its problems, L. Bielinis responded it is less likely.

"The Conservatives have not arranged for an alternative coalition. The party's representatives publically declare such intentions, but a coalition has to be a group of politicians making up the majority or close to it. How they could do it, I cannot fathom," he said.

According to the political scientist, if the situation turned toward a minority government, that is to say if the responsibility for the cabinet was left to exclusively the "Farmer" Seimas group, this burden would not be light.

"The Seimas would have strong control over all their actions and would prevent decisions which would not suit the interests of either the Social Democrats, the Conservatives or the Liberals. I do not believe that the "Farmers" would agree with it. To them it would be a massive blow because they would obviously lose all attention from the voters, being unable to achieve even the minimum they pledged during the elections," L. Bielinis stressed.

Mykolas Romeris University lecturer, political scientist Rima Urbonaitė believes that currently the cabinet's position is even worse than if it were working under minority conditions.

"This cabinet is so isolated, that the usual description of minority government no longer fits it. This is simply a cabinet which has splintered off from the Seimas, is acting in isolation and its work is gradually being paralysed. Such a situation can last a very long time even though it is a dead end. Of course we could also see some notable changes which would lead to thoughts of the cabinet's disintegration, but it is clear that the current scenario does not promise any progress," she said.

According to the political scientist, currently the cabinet has three oppositions – the real one, the Social Democrats, who are seemingly partners, but often present opposing opinions, as well as a group of dissenting individuals within the LVŽS group itself.

"The current actions of the Social Democrats are overall very interesting. At the same time they are in the coalition, thus using all the resources of being in power, but also they are acting as the opposition. If something goes bad, seemingly no-one blames them because they are already in the opposition, especially given their low representative count. There are few reasons to think they could forge some sort of success with the "Farmers" because it is unlikely that the Social Democrats themselves are interested in the "Farmers" succeeding, being competitors for the same electorate. It would appear that the Social Democrats are playing a cunning game and neither the "Farmers", nor particularly the cabinet can rely on them," she stated.

According to R. Urbonaitė, by working under such conditions, the cabinet can last, but these are not premises for achieving results. "The cabinet will never be able to achieve a breakthrough or make serious decisions if it does not have support in Seimas or if that support is fragmented, when you cannot tell who and when will support a project," the political scientist explained.

Nevertheless, R. Urbonaitė believes that if Prime Minister S. Skvernelis has further political plans or perhaps presidential aspirations, right now withdrawing from the post of PM and becoming a regular member of Seimas would mean a significant decline.

"It would be difficult to seek high posts from a low position because he would be quickly forgotten if he became a regular member. Another matter is that perhaps he hopes that he can still achieve something in the post of Prime Minister. However even for his continued career the main premise is successful work in the cabinet. Due to this, in a certain regard, he is already cornered. Withdrawing would do him no good if he wants a further career, but to achieve results he needs successful work, for which there are no conditions. As such his situation is complicated," R. Urbonaitė noted.

According to her, if they chose to withdraw from the coalition, the Social Democrats would become harsh critics of the cabinet. Whether the "Farmers" manage to come to a deal with the Conservatives over a new coalition is also a question because this political power will likely not want to cooperate with an entity that barely controls its own.

"The Conservatives believe that all the processes are stalling and likely understand that the same would happen if they joined power," the political scientist stressed.

According to R. Urbonaitė, if the Social Democrats withdraw and they are not replaced with the Conservatives, the "Farmers" would be left in the minority and even this minority would not be united because even now some LVŽS members are demonstrating independent positions.

"The question is how long such a cabinet would last. It could exist for a time, but at the end it would likely still collapse. Our political system is such that for effective work it is necessary to at least have the support of a minimal majority, but now we are observing a very different situation. Thus if this cabinet cannot find a suitable model of interacting with the Seimas, if it cannot obtain the needed support, it will find it hard to work. Unless it chooses to just exist," she stated.

Cautious of talking about divorce

That the "Farmers" understand the gravity of the current situation is evidenced by the softened rhetoric toward their partners. Only recently the "Farmers" directly spoke of terminating the coalition when their Social Democrat partners would express doubts on certain projects.

Just in late May, with debates over alcohol sale restrictions flaring in Seimas and with concerns arising that the Social Democrats will refuse to support the "Farmer" initiatives, the latter boldly spoke they can even work as a minority government.

"And finally the Lithuanian people will evaluate what things are like – who wants to help resolve the state's issues and who wants to settle party matters. Because we are currently faced with everyone agreeing that reforms are good, but when we reach decisions they hide away," influential LVŽS group representative Povilas Urbšys told Delfi back then.

Last Friday he was more cautious in evaluating the Social Democrat's influence on forestry reform. "The Social Democrats have accumulated a number of grievances by now – due to Lietuvos Geležinkeliai, due to the Centre of Registers, due to loss of influence in the Ministry of Justice, due to the forestries. That they talk of decisive choices in autumn, I have no doubt that once again it may turn out that for them party interests are above those of the state, if they settle for this decision (to withdraw from the coalition – Delfi). But I hope that tempers will settle and in autumn we can talk about working together," P. Urbšys noted.

A blow to the cabinet – opposition performs an unexpected manoeuvre

Skvernelis promisses a breakthrough year – will he avoid Butkevičius‘ fate?