DELFI
aA
Members of Seimas elected 4 deputies for Seimas Speaker Viktoras Pranckietis – two Peasant Greens, one Social Democrat and one Conservative. Algirdas Butkevičius was not among the elected. His candidacy was supported by 66 members of Seimas, with 53 voting against and 14 abstaining. In order for a politician to be elected to the post, the number of votes against and abstaining has to be less than the number of votes for. 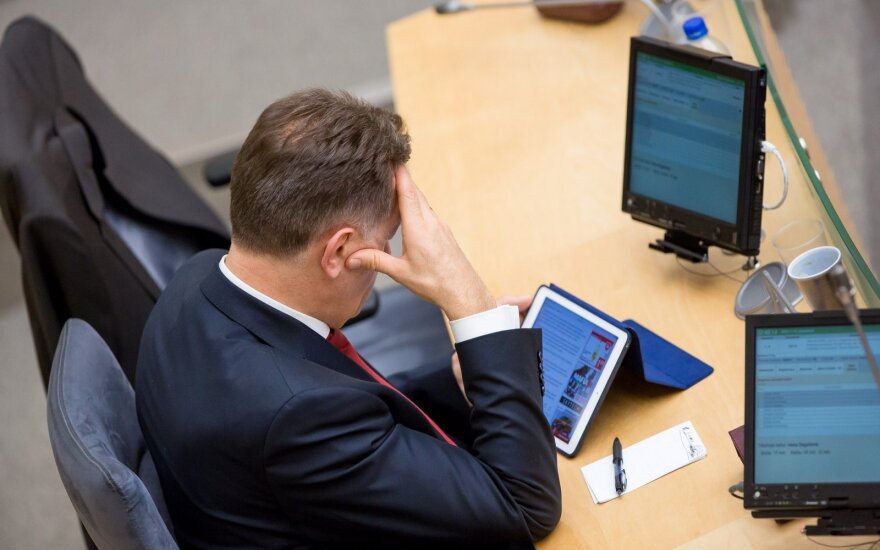 A. Butkevičius left Seimas before the results were announced. The first deputy is to be Peasant and Greens Union representative Rima Baškienė. In the anonymous vote, her candidacy was supported by 105 parliamentarians, with 15 voting against and 14 abstaining.

Others to be voted in as Seimas Deputy Speaker were Peasant Greens Arvydas Nekrošius, Social Democrat Gediminas Kirkilas and Conservative Irena Degutienė. Nekrošius was supported by 82 members of parliament, 24 voted against and 27 abstained. G. Kirkilas received support from 96, with 20 voting against and 19 abstaining. I. Degutienė received 101 votes for, 18 against and 16 abstentions.

I. Šiaulienė – unfortunate that it happened to us

The election of the Seimas Deputy Speakers was done late on Monday night, however specifically A. Butkevičius faced the most criticism. That said the criticisms were mostly from the opposition, but it is clear that the Social Democrat leader failed to gather votes from even members of his own party or coalition partners – the Peasant Greens.

What happened then? “There weren’t enough votes. There was an agreement, but it appears voting was not done responsibly enough. We suspect that we lacked votes from our partners because after the vote count it would turn out that my entire fraction would have had to not vote. That cannot be,” explained Social Democrat fraction prefect Irena Šiaulienė.

The politician does not dismiss the idea of proposing A. Butkevičius’ candidacy once more, stating that “The Seimas has just begun work, we still have time to fix this. In the history of the Seimas, this is nothing new, there have been missteps, it is just unfortunate that it happened to us.”

In the 2008-2012 Seimas term, there weren’t enough votes to elect Arūnas Valinskas as Seimas Speaker. After a coalition fraction discussion the candidacy was proposed again and passed.
This case may be more difficult. It is possible that the results are related to gathering discontent toward A. Butkevičius within his party. A recent party council meeting saw Butkevičius face criticism and urges to immediately resign from party leadership after the lost Seimas elections. The party chairman announced his intent to immediately resign then, but his supporters held him back with statements that there is no need to be rash. The council did not ratify the resignation, but a number of Social Democrats say that this was an almost orchestrated spectacle.

Such a jibe could also be seen as a little lesson on part of party colleagues for the behind the scenes agreement made by A. Butkevičius and I. Šiaulienė with the Peasant Greens Ramūnas Karbauskis on swapping the Ministry of Social Security and Labour for the Ministry of Economy, without consulting the rest of the party. Four members of the SocDem negotiation group, Andrius Pavilionis, Julius Sabatauskas, Algirdas Sysas and Gintautas Paluckas publically expressed indignation at this.

Late Monday night, Peasant and Greens Union chairman and fraction prefect R. Karbauskis said that he is left with a question of whether all his fraction members unanimously supported Butkevičius, but in his opinion it will be possible to redo the vote on Tuesday.

“It’s some sort of misunderstanding,” said Karbauskis, adding that “We have to calmly discuss this among the fractions tomorrow morning and I think that we will gather the majority of votes in a revote.”

A. Butkevičius reminisces on achievements

In an introduction to his colleagues in Seimas, A. Butkevičius listed the achievements of his cabinet: adopting the euro, continued apartment building renovation, continued energy infrastructure projects. The politician has made similar speeches in Seimas before, presenting reports on cabinet activity.

“I want to say that I think that the electoral campaign is over and as the PM, using this tribune and seeing some of the ministers here who entered Lithuanian history in the last term with the tasks they completed, which will never be forgotten. First of all the adoption of the euro, the negotiations with the Organisation for Economic Co-operation and Development, the renovation of apartment buildings. I want to stress that in Lithuania (perhaps many members of Seimas do not know) 1930 buildings are being renovated, this year already 530 have had their renovation completed,” explained Butkevičius.

The opposition was highly critical of Butkevičius’ candidacy for deputy Speaker, as the politician is currently also the acting PM.

“I will remind of judicial arguments – the candidate is currently also acting as Prime Minister. And overall, I would propose the Seimas Speaker to once again consider, whether fewer deputies would not suffice,” Conservative Jurgis Razma explained his disagreement with Butkevičius’ candidacy.
Currently the maximum number of Seimas deputy speakers is seven, but the new government intends to change the Seimas Statute so that the maximum number would be reduced to five.
Delfi reminds that the coalition government has been formed by the Peasant and Greens Union and the Social Democrats. They have announced a Seimas majority government, which will form the cabinet.

The Homeland Union – Lithuanian Christian Democrats, the Liberal Movement and Order and Justice will work in the opposition.

The Polish Electoral Action in Lithuania – Christian Families Union have not announced themselves as the opposition, but will not be part of the majority government. Another two members of Seimas will form the mixed group.

Viktoras Pranckietis of the Lithuanian Peasant and Green Union was elected as Lithuania's new...

Lithuania's new Seimas will have six political groups and a mixed group of parliamentarians who have...

Lithuanian President Dalia Grybauskaitė on Monday signed a decree accepting the resignation of...