A revolt brewing in the conservative camp? 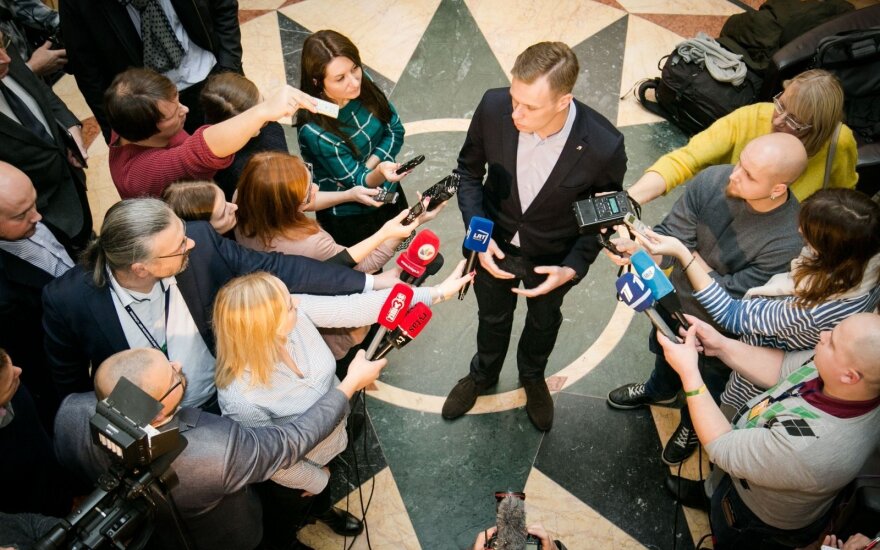 “Having constantly repeated that we will form a coalition government with the “Peasants” during the election campaign and now using fairly disreputable means to push this decision away from ourselves, we do not appear very credible. We will finally go into the coalition, just after ruffling making a mess of ourselves,” an anonymous Conservative member told LRT.lt.

This is how he evaluated the current situation where party leader Gabrielius Landsbergis earlier declared that the party will participate in forming the new cabinet, but now seems to have forgotten about it.

According to LRT.lt information, a part of the Conservatives are already rebelling due to such positions of their young leader and intend to initiate a party presidium hearing.

At the initiative of member of Seimas Paulius Saudargas, an appeal has been submitted to the party leadership. It is signed by eight members of the presidium, with member of Seimas Audronius Ažubalis being the first signatory. He also distributed a letter which calls on party members to participate in the “Peasant” formed majority government and cabinet.

“The “Peasants” obtained victory, but despite this many of the elected members have never been seen and are unknown to voters; a significant part of the party’s political provisions are unfamiliar to other participants of the political process.

That society decided to risk and choose “face-down cards”, shows a dangerous disappointment in the government and politics in general. However the second best performing party, the Homeland Union – Lithuanian Christian Democrats (TS-LKD), need a decision on how to deal with these “face-down cards” during the coming term instead of standing around shrugging,” wrote A. Ažubalis.

According to him the easiest and safest for the party way is to remain in the opposition for another four years and wait for the coalition to experience a fiasco, which is inherently pre-programmed in case of a “Peasant” – Social Democrat coalition.

“But such a path is irresponsible both from a party and state point of view. We ourselves have stressed many times that Lithuania cannot lose another four years – we need change, we need it now and voters have voted for it. It is unfortunate that they did not vote as we wanted them to, TS-LKD was seeking the highest number of mandates in Seimas and leadership of the government. But is this a reason to withdraw?” Ažubalis asked his party.

According to him the stance of “all or nothing” usually leads to a dead end in politics. Another dead end scenario is transferring the responsibility for the results of a new government on the shoulders of the electorate.

“If, while forming or implementing the cabinet programme, it becomes clear that the Lithuanian Peasant and Greens Union (LVŽS) are not real partners, but a state woe and risk, specifically we (we cannot expect this from the others) have to resolve this woe and neutralise the risk,” assures the former Conservative Minister of Foreign Affairs Ažubalis, proposing for party members to at least try talking and finding common ground with the winning party, to “get over yourself and attempt to work from “secondary” political positions this term.”

State problems that need resolving are, according to the politician, so many that there will be ample work for everyone.

However it is dubious whether the Conservative leader Landsbergis will initiate a party presidium meeting this week because eight signatures is insufficient to ensure this.

Member of Seimas Kęstutis Masiulis, despite not being a member of the party presidium, expressed support for the initiative and claimed he would definitely sign a call to arrange a meeting as soon as possible.

Other Conservatives have expressed support for a coalition with the “Peasants” during talks with LRT.lt, such as Agnė Bilotaitė and Vytautas Juozapaitis, with Jurgis Razma also expressing cautious support. However currently he is away from Vilnius and was unable to support P. Saudargas’ initiative with his signature.