A reserve for the wealthy and its grimaces: the secret of B. Bradauskas and former minister revealed 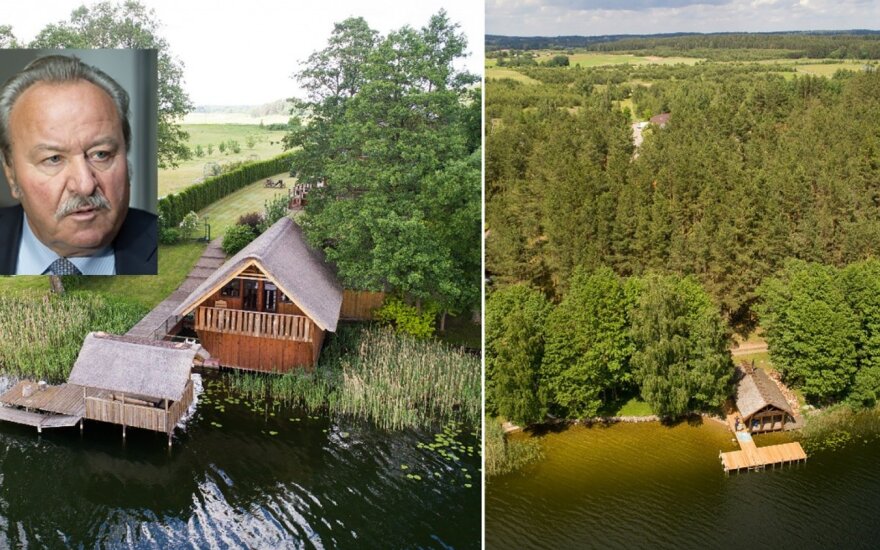 While holidaymakers cannot even access the famous Margis lake due to fences, those with houses next to the lake are creating oases of calm and enjoy their privacy. However a Delfi investigation has revealed that the laws are understood differently by varying parties. While there can be no buildings at the very lakeside, journalists have observed that for former member of Seimas Bronius Bradauskas and former minister Vytautas Markevičius, this has not been an obstacle to build small constructions on the lake or next to it.

The State Territory Planning and Construction Inspection (VTPSI) has initiated an investigation into the situation in the Trakai region. The inspection will not only have to visit the premises of these two known figures, but also the territory of UAB NJ – Trade, which may be occupying state property, with a potential several buildings being built on state land. The company’s stockholder is Irina Mataru, the daughter in law of the founder of the Nijolė fur salon Nijolė Veličkienė.

The shoreline preservation band cannot have any buildings on it or any fences, except hidrotechnical buildings, water pumping and release equipment, watering places, bridges and piers. The area is to be accessible to any who desire, with no need for the permit of nearby landowners.

Buildings on the lakeshore

Delfi journalists have discovered two buildings which raised suspicions. One of them is built right next to the Margiai Lake. The State Enterprise Centre of Registers has informed that the plot of land and the buildings on it belong to former Minister of Justice and Interior Affairs, the chief partner of the attorney trade union “Markevičius, Gerasičkinas ir partneriai” V. Markevičius. According to the centre, based on property rights, he shares the land with Kęstutis Golubkas.

On arriving in the territory, journalists noticed that a small wooden building has been constructed right next to the lake, with construction workers still busy around it. On inspecting the territory it did not appear that the building is separated from the shoreline by 5 metres, the typical shoreline protection distance.

Delfi were unable to reach the owner for further comments.

B. Bradauskas denies breaching the law

Another nearby building draws attention as well. That said, it is built on the lake, rather than the lakeside. The Centre of Registers informs that the plot of land and real estate belongs to former member of Seimas, Social Democrat B. Bradauskas.

It would appear the building is intended for recreational use. The upper floor contains a terrace and chairs, features a beautiful panorama of the lake.

But we should remind once more that there can be no buildings on the lakeside protection zone.

B. Bradauskas does not believe he is in breach of the law however. He denies that the bathhouse is built next to the lake and denies the presence of fences which would obstruct passage.

The former member of Seimas also adds that the bathhouse has been on the property for some 10 years and there had yet to be any complaints regarding it. According to him there have been no issues in terms of passage on the lakeside.

Representing the State Territory Planning and Construction Inspection, Albinas Keturka has informed that an investigation has been launched regarding these two cases and to determine the legality of the two buildings, inspectors will visit for an inspection.

Breaches discovered, but still not resolved

A completely different situation has developed on the territory of UAB NJ – Trade. Based on the regia.lt map, it is visible that a large portion of state owned land is occupied next to the lake. Furthermore a number of buildings can be found to be fully or partially in state owned land.

The representative of the National Land Service (NŽT) Audrius Gelžinis has told Delfi that the situation is known to officials and that an inspection was performed last April. He explains that breaches were observed, the owners were informed of it and requested to voluntarily resolve the breaches observed. Specialists from the Trakai department have done a repeat inspection and found nothing to be resolved so far.

While the breach was observed and it so happens that it still remains, there have been no penalties. A. Gelžinis explains that this occurred due to legislation limiting the possibility for prosecution due to lack of clarity on the direct culprit.

Nevertheless he informs that soon the NŽT will conduct a repeat inspection. On the side of the VTPSI, A. Keturka also notes that their officers have also begun an investigation and will be visiting the territory to establish the legality of the buildings.

The Centre of Registers data shows that currently the property belongs to UAB NJ – Trade, its stockholder being I. Mataru.

While Delfi was unable to reach her for a comment, the head of the company Jurgita Milaševičienė was willing to give a brief response.

When asked how she views the investigations launched by the NŽT and VTPSI regarding the potential occupation of state owned land in the Trakai region, the director assured she had not heard of such issues before.

L. Velička, who NŽT officials tried to contact last year, has told Delfi that he also only heard of the investigation for the first time then and said that the situation was completely unexpected. According to him the construction at the specified location was undertaken based on all requirements with no deviations.

Lithuania's Agriculture Minister Bronius Markauskas has decided to sack Danielius Kuprys from the...