A plan B for the “Farmers”: G. Kirkilas names a potential joint presidential candidate 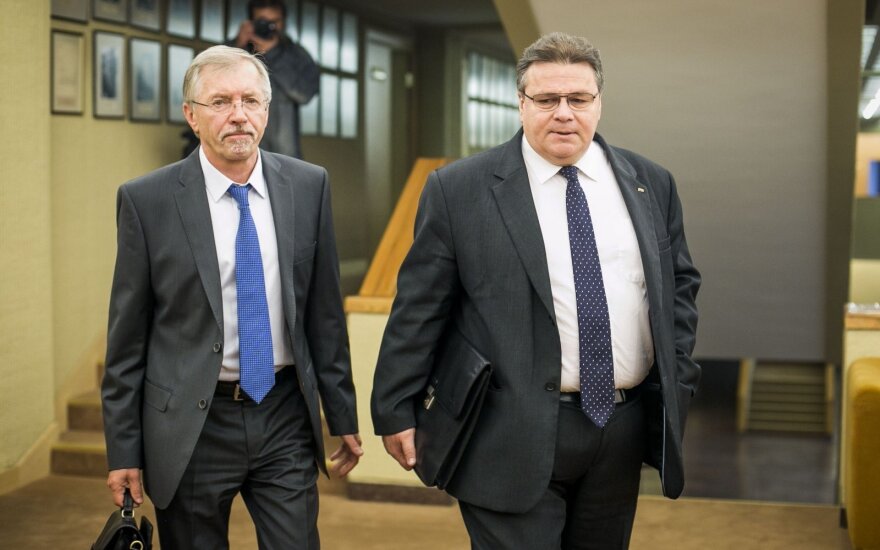 Lithuanian Social Democrat Labour (LSDDP) leader Gediminas Kirkilas states that Foreign Minister Linas Linkevičius could become a joint presidential candidate for his party and the "Farmers". Meanwhile, "Farmer" leader Ramūnas Karbauskis doubts the minister's chances in the elections and repeats that his party will have its own candidate, lrt.lt writes.

Chairman of the recently created LSDDP Gediminas Kirkilas assured that Social Democrat Labour have made preliminary agreements with the "Farmers" to back a single presidential candidate in the 2019 elections, however according to him, other options are available. One of them, according to Kirkilas is an LSDDP candidate to head of state, which could also be backed by the Lithuanian Farmer and Greens Union (LVŽS), if the latter do not choose their own.

G. Kirkilas did not conceal that in his opinion Foreign Minister L. Linkevičius could become the LSDDP candidate.

"He is a member of our group. Yes, of course we believe that he would be willing. We can think, but the question is whether the politician will go ahead or if there will be some other variants. But in my opinion, this is a realistic candidate. By the way, it is also shown by sociological research," the Social Democrat Labour leader told lrt.lt.

"If there is a variant where the (the "Farmers") do not have anyone, none of them participate, then sure – why not?" G. Kirkilas explained when asked whether Social Democrat Labour would offer the "Farmers" to back L. Linkevičius' candidacy.

L. Linkevičius is not a member of the LSDDP, however according to G. Kirkilas, this is no issue in terms of him becoming a Social Democrat Labour or LSDDP and "Farmer" candidate to president. According to the politician, there have not yet been talks with L. Linkevičius himself about the possibility of him running for president. G. Kirkilas explains that the LSDDP will make its final decision on the presidential elections this October or November.

Minister does not say no, R. Karbauskis would disagree

L. Linkevičius himself told lrt.lt that currently he is not thinking about participation in the 2019 presidential elections, however, he hinted that his position could change.

"Honestly, currently I am not considering the possibility. I am not saying I never will, but at the moment I see no reasons to consider such possibilities.

For now, I have different plans, but we will see how matters develop. It is hard to answer all the questions right now," L. Linkevičius stated.

Meanwhile, LVŽS leader Ramūnas Karbauskis emphasised that the "Farmers" will have their own presidential candidate, thus in his opinion, the LSDDP will not need his party's help in this matter.

"We will have our own candidate. With all due respect to the minister (L. Linkevičius), but he is unlikely to win the elections," R. Karbauskis told lrt.lt.

According to him, for now the "Farmers" have not made any decisions over a presidential candidate in the party.

"I only know that the person we will nominate as a presidential candidate will win the elections. Due to this, the decision is very important for all of Lithuania," the LVŽS leader brimmed with confidence.

According to R. Karbauskis, the "Farmer" presidential candidate should be chosen during the party's congress in autumn. In his opinion, a non-LVŽS member could also become a candidate.

"We never asked whether it will be a party member or not. We did not ask this question in either the municipal or parliamentary elections," R. Karbauskis highlighted.

"If he was a candidate for the LSDDP and "Farmers", these two political powers would become the basis of his potential. Indeed, the "Farmer" chances in this case (presidential elections) truly are large and if this happened, his (L. Linkevičius') chances would be very large because we see what ratings the "Farmers" have despite making not always the best decisions and not having the best appearance in the public sphere. Thus their potential would be transferred to the candidate's," L. Bielinis explained to lrt.lt.

The political scientist admitted that even L. Linkevičius himself "appears presidential", thus the post would suit him.

"He is qualified in foreign affairs, has participated in the NATO system, he is an individual, who would be familiar with foreign relations issues. L. Linkevičius is manoeuvring quite smoothly between political powers and their interests, safeguarding the base line in foreign policy and at the same time somewhat remaining unaggressive and acceptable to practically all political powers. Thus in this case, as a personality he is flexible and professional, which is important in foreign policy," the VDU professor noted.

R. Karbauskis has mentioned that L. Linkevičius would not be a suitable "Farmer" candidate to president, however L. Bielinis doubts this. The political scientist noted that the LVŽS is not dedicating much attention to the presidential elections, there is no talks to be heard of potential candidates. True, there have been talks about V. Pranckietis and S. Skvernelis, but neither has declared his intent so far. We are increasingly seeing that neither is likely to run for president.

Why is it so? I would believe that it is because the "Farmer" party is not interested in the post of president, which is quite restricted constitutionally and its activity is more directed to foreign policy, state representation. The "Farmers" care more about resolving matters here, locally, ones related to the economy. As such, all of their potential will be geared not to the presidential or European Parliament elections, which they aren't even talking about, but to municipal elections because I believe that those who rule the municipalities will rule Lithuania.

Presidential candidate’s initiative described as a national threat: such people should not even be invited to Lithuania

R. Valatka. Presidential elections: who or how? (1)