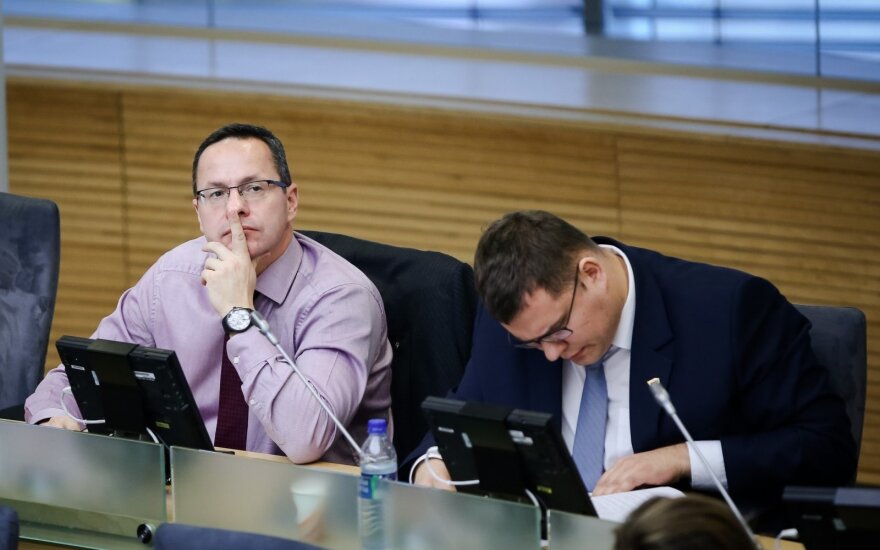 Members of Seimas have been clamouring that the government is doing too little in order to obstruct the construction of the Astravyets nuclear power plant which poses a serious threat to Lithuania. According to the opposition, Belarus and the Russian nuclear energy corporation constructing the power plant have in turn been intensively working with international organisations and the NPP could even be declared safe soon, Tomas Dapkus wrote in alfa.lt.

“The first conclusions are in and they more or less claim that everything is fine there, but do not answer the key question of placement and this is in essence our main objection because we know that it was placed in breach of the International Convention on Nuclear Security, something signed by Belarus itself. It was a political decision to choose the least secure option for us and in such cases it is necessary to request permission from the neighbour, but as the Belarussians admitted themselves during consultations in Vilnius, when calculating population density around the reactor, they only calculated toward the direction of Minsk, completely disregarding the Vilnius side which is absurd,” said Seimas Foreign Affairs Committee member Žygimantas Pavilionis.

The Lithuanian government claims that it has received confirmation from the agency that due to Belarussian request its experts performed an incomplete mission. Location choice, seismic research and impact on the environment were not reviewed. This, Lithuanian officials note, shows that Belarus is applying international nuclear security standards selectively.

“Our first objective is to halt construction because it is insecure, being built without adhering to nuclear security convention <…>. Failing this we have decided to not allow in the electricity produced there, this would be done from day one on the power plant being made operational, such is our message which can be read in the national security strategy,” said Seimas Energy Commission Chairman Virgilijus Poderys.

Catastrophe would impact the whole region

“Lithuania has little leverage to specifically halt construction, if any at all, what we are doing is that we are firstly demanding transparency. We are demanding reviews by relevant organisations, the so called STRESS test, so far there has been no specific information. We have informed the European Commission, based on the data I have seen, God forbid an accident happened, it would influence not only Lithuania, but also Latvia and Poland,” said Seimas vice Speaker, European Affairs Committee Chairman Gediminas Kirkilas.

Minister of Foreign Affairs Linas Linkevičius was exactly in Poland this week.

“Minister Linkevičius is doing nothing so far in order make this problem, this clear breach of nuclear security convention, a matter of international significance understood by all capitals. All people at all levels need to know that this is an obvious breach of nuclear security or at least that this is how civilised states understand it. Thus Astravyets has to be halted. Yes, Minister Linkevičius never brings up this question, he is concerned with security that those processes would work, but he does not raise questions such as the wrongful placement. It cannot be built there, but while this continues, I predict that in this summer’s UNEP (United Nations Environment Programme) minister meeting in Minsk, it will be confirmed that Belarus is correct,” said member of Seimas Žygimantas Pavilionis.

Minister Linkevčius assures the topic of Astravyets was touched upon in Warsaw.

“I heard a sort of agreement to the thoughts I presented, but there was another aspect, it is related to us needing Polish support and assistance in synchronising our electricity infrastructure with Western Europe because it is likely that the only rational way of doing so is through Poland. We discussed these wo matters in detail,” he said.

Could be too late

Seimas Energy Commission Chairman V. Poderys says that it may be too late with Astravyets.
“Possible or impossible, but we have to do all we can – better late than never. We cannot stand and look with our heads down like sheep, we have to do everything well, energetically and in cooperation with the international community,” V. Poderys says.

“This question should become our main question up to this summer and if we begin a discussion with anyone in the world, we should begin with this. I do not see it at all so far, that it will become a national question and when Brussels feels, when diplomats in the West feel that this is the greatest issue for Lithuania, then they will aid us,” says Ž. Pavilionis.

Seimas vice Speaker G. Kirkilas says that the interests of numerous countries are varied and interlinked, thus it is difficult to gather a coalition of reliable allies against Astravyets.

“There is no unified position, secondly the member states have very different views of nuclear power – some for, some against. Take France, which is an enthusiast of nuclear energy, of course has manufacturers of generators, Germany, as you know, has halted it though there is no unified opinion there, but they stopped it, but meanwhile they are constructing Nordstream-2 in the Baltic Sea, this is one of the most difficult questions of energy infrastructure. There is no unified opinion. Another thing – we have to always present serious arguments. We say it is close, while some politician from Luxembourg says they have one even closer, but we say that the technology is different,” G. Kirkilas said.

Proposes to talk to the Belarussian president

Meanwhile member of Seimas Linas Balsys says that it is possible that due to poor financing and constant incidents the construction itself could flounder, however it would be best to find direct contact with the Belarussian President Aleksandr Lukashenko himself. According to Balsys this should be done by President Dalia Grybauskaitė, given that A. Lukashenko has become friendlier toward the West after unfavourable signals from Moscow.

“Using such a moment, beginning open dialogue with him on the placement, on the quality, discussing Belarussian energy needs because so far we do not know if the power plant is for domestic use or export. He cannot have many expecations for export because it would be greatly hindered because it is not competitive in our market. If it is for domestic needs, then the question of prices and such arises. Thus with a dialogue like this, what are the real needs, why is it being built, could those needs be satisfied through cooperation with Lithuania and the EU? Perhaps by building several powerful biomass, biofuel power plants,” said Balsys. While he admits it is an audacious idea, it is worthwhile.

“It may sound naïve or surreal, but without such a dialogue we will never know. Some countries such as Austria, albeit a democratic state, had already constructed a nuclear power plant, but due to people’s opposition it never went operational and is now a museum,” the member of Seimas explained.

The first reactor in Astravyets is planned to go operational already in 2019.