A. Kubilius - I. Šimonytė would be a good candidate 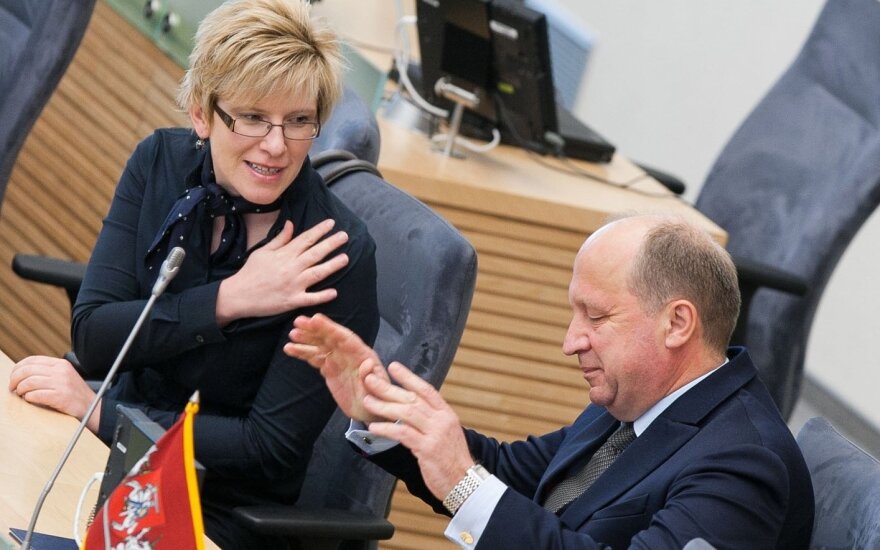 "Žygimantas Pavilionis and Vygaudas Ušackas may have already officially stated their intent to participate in the 2019 presidential elections, but for now everything is at the level of deliberations. I have heard that Ingrida Šimonytė may also run as a candidate. The possibility for other candidates to appear cannot be dismissed either," Homeland Union – Lithuanian Christian Democrats leader Gabrielius Landsbergis told LRT.lt.

Evaluating candidates currently being mentioned in the party and the political couloirs, he could not highlight any because they have yet to have a chance to reveal themselves, excluding entries and comments in social media, "We will be able to form clearer portraits of them when we hear what they have to say of social policy, education, taxes, foreign policy, relations with Russia and national defence."

The candidate to represent the Conservatives during the presidential elections is to be elected in primaries next year.

A bit less active, but active nonetheless is former Lithuanian ambassador to the USA, member of Seimas Ž. Pavilionis. Meanwhile former Minister of Finance, member of Seimas I. Šimonytė is for now reticent and avoids commenting on participation in the elections.

Avoiding a clear answer, but actions are eloquent

"Due to my current diplomatic office I would rather forgo any further comments on the Lithuanian presidential elections. After concluding my work as EU ambassador in Moscow, I will remain active in international politics, participating in the European Union External Action Srvice and other EU and US NGOs, as well as university activities. From October 2 this year I will head the Kaunas Technology University Institute of Europe," V. Ušackas responded to an LRT.lt query.

He explained he had no time for a discussion of intentions to participate in the presidential elections and attitude toward the country's core problems because he has urgent meetings in Moscow after his holiday. That said, already on the next day – August 1 – after a brief talk with LRT.lt on the phone, the diplomat accompanied Seimas Speaker Viktoras Pranckietis at the welcoming of Mission Siberia 2017 members in Vilnius train station.

Work in Seimas – the end of the former minister's career?

"The party will raise candidates and hold primaries. When my candidacy is raised, then I will answer what I will do with it. But if no-one raises it, then it will be simpler. That people mention names, it is probably normal to want to talk about something during the cucumber season," I. Šimonytė quipped, avoiding a direct answer.

During an interview several weeks ago she mentioned that her political career may end with this term in Seimas, which will last to autumn 2020.

"The surnames (Ž. Pavilionis', V. Ušackas' and I. Šimonytė's) are correctly mentioned. Some of them are actively demonstrating their intent to aim for the presidency," former Conservative leader and former Prime Minister Andrius Kubilius commented.

When asked whether he believes that currently one of the most active candidates is V. Ušackas, he spoke openly, "The party has opinions that I. Šimonytė would be an excellent candidate. The discussions in the party will continue for a long time. Both the potential candidates and party members will have much time to make decisions because the primaries will happen in the party, likely in the second half of next year."

A. Kubilius admitted that he has yet to decide which candidate he would support, but did not deny that I. Šimonytė, who worked as Minister of Finance in his cabinet, could be a strong president because she has both the necessary abilities and the competence, as well as the charisma needed as head of state.

However certain influential conservatives have mentioned to LRT.lt that apparently I. Šimonytė has already declared to the party management that she will not participate in the elections.

Party will have to unite for the presidential elections

Member of Seimas Laurynas Kasčiūnas, who is a part of the Christian Democrat wing of the Conseravtives like Ž. Pavilionis, stated that he believes that in electing its candidate to best represent not only the party, but all right wing parties, the Conservatives have to unite and make a unanimous decision, "The Presidential elections are not the elections of the party chairman and if currently some may sympathise with one candidate and others with another, then after the primaries we will have to unite behind a single candidate."

L. Kasčiūnas did not hide that he currently supports Ž. Pavilionis and is certain that the latter would be a strong president, able to well represent the right wing value spectrum.

Testing his decision in every meeting

"I do not have a formal decision, but I test it during every meeting with people. While I travel around Lithuania, I am trying to hear out as many compatriots as possible and everything will depend on their support," Ž. Pavilionis admitted.

He is convinced that if the Conservatives shed certain stereotypes, were more socially sensitive, they could unite a mass of people who currently need help and attention, "In essence we have no competition in the centre right, thus if we finally turn to the people rather than serve big money or systems, then we would win the presidential elections. But will my fellow party members believe in such a vision? We will see. There is still time."

Ž. Pavilionis stated he believes that other than him, V. Ušackas and I. Šimonytė, there may be more candidates among the Conservatives, who may seek to run in the presidential elections. Some, according to him, will be Western inclined, while some – more so to the East and pragmatic relations with countries in that direction.

Sharing his impressions from meetings with people around Lithuania, the parliamentarian admitted that the Conservatives made a number of mistakes while in power, but upon learning from it and returning to social sensitivity "which was handed over to leftist forces and populists and certain green discoveries with red spices," they could become the people's party.

"Earlier both the left and the right, instead of helping people and inspiring them to business, creativity and family, only strengthened the government and bureaucracy. But I now notice that the party is gradually uniting for a completely different perspective," Ž. Pavilionis stated.

He lamented that the current majority government, as ones before, including right wing ones, continues to work for big capital, forgetting both progressive taxation and painful social problems, while 40% of Lithuania lives in poverty.

Both diplomats – similar in some regard?

Considering the chances Ž. Pavilionis and V. Ušackas have in the presidential elections, sociologist Vladas Gaidys noted that their fame is very similar in Lithuania right now. In terms of education, competence in foreign policy and international relations, they are also apparently almost identical.

"How they both develop their electoral campaigns, we do not yet have clearer signs. V. Ušackas is perhaps more active on social media. It can be seen that he is trying to appear among regular Lithuanians more often and does not avoid presenting himself as an expert on Russia, its subtleties and domestic life," V. Gaidys shared his insight.

He also noted that V. Ušackas could benefit in the presidential race by returning to Lithuania, relinquishing a further diplomatic career, good wage and excellent living conditions.

According to the sociologist, this would have him compared to President Valdas Adamkus and President Dalia Grybauskaitė, who were acknowledged for sacrificing their welfare by returning to Lithuania.