A hundred days of Seimas – reflections 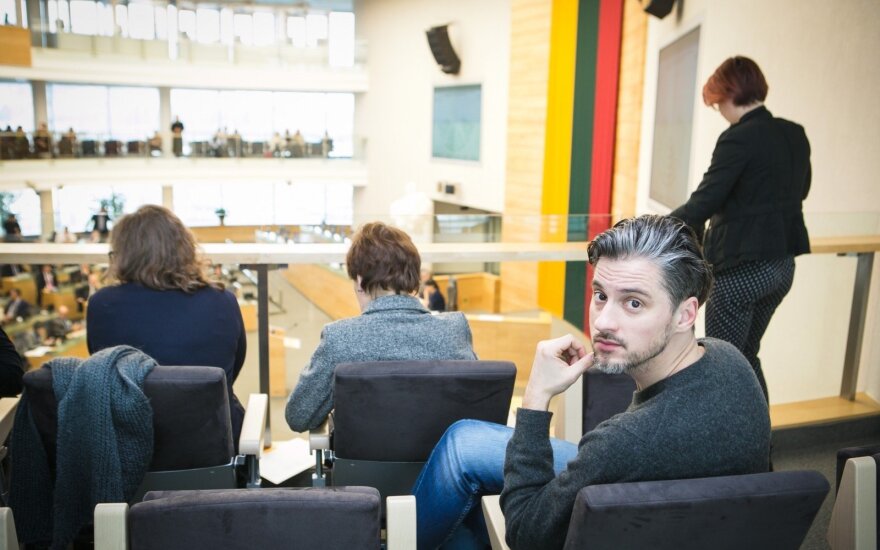 Car rent, hidden relations, furs and an expensive designer coat, national costumes, a grand piano in Seimas, opposition to anti-violence against children legislation and an attempt to change the in vitro fertilisation legislation which was passed with much difficulty. Such are the first memories to spring to mind when speaking about the Seimas. The Seimas which has now worked for 100 days, but as its Speaker, delegated by the Farmer Greens, Viktoras Pranckietis says, it has worked for only 66.

There has been much flailing about – the new Seimas has halted the implementation of the new Labour Code, police reform, now also postal service reform. The promised income growth is limited to a little over ten euro for retirees and a few euro for teachers, meanwhile for authors taxes rose, hence incomes decreased.

The Farmer Greens and Social Democrat coalition is not marked for its unity, neither is the Farmer Greens themselves, nor the opposition, which has still not been able to elect a leader.

Over 100 days Seimas has passed 200 pieces of legislation and its leader says that it would give it a score of 8 out of 10 for its work, however so far he has not succeeded in improving the parliament’s image, something he pledged to attempt; Seimas currently has no trust from more than 47% of the population, with only 14% trusting, according to the most recent survey by Vilmorus.

Voters have put their faith in the Farmer Greens. Having won fifty eight mandates, the party reached the one hundred day milestone lacking two members.

Due to the arising scandals linked to the story of Greta Kildišienė, she herself had to leave Seimas, meanwhile another member – Bronislovas Matelis – chose to leave the Seimas group. Had G. Kildišienė chosen not to resign, the group could have fallen apart overall. The first acts in Seimas also caused scandal – deliberations on in vitro fertilisation, VAT exemptions for heating, children’s rights protection legislature.

Meanwhile the junior coalition partners, the Social Democrats, who have nineteen members in Seimas, attracted the attention of the public through their scandalous search for ministers. With its leadership concerns the party is currently invisible in Seimas work.

Chief Editor for the Delfi.lt portal Monika Garbačiauskaitė-Budrienė says that it is unlikely that the start of the Seimas‘ work has satisfied voter’s expectations, stating that “Much was promised, an expert cabinet, large reforms. A hundred days have already passed, the “Farmers” asked to let them work, not to criticise and etc. But I would really say that few such fronts have opened up, matters have been messed up, the waters have been dirtied, but there has been no sight of any sort of specific reform.”

Daiva Rakauskaitė, the head of the Business Angels Fund which helps start up business, says that businesses are patiently waiting for what has been promised.

“Firstly there are of course hopes in the tax sphere, that say investment taxation would be simplified or incentivised, something that has been talked about for a long time, thus let us believe that the Seimas and new cabinet will agree to it,” the Association of Financial Analysts expert D. Rakauskaitė said.

Bank economists state that they have not seen any significant achievements by the new Seimas and are waiting to see what steps the majority takes in its first year. Experience shows that if important reforms are left to later, they end up not being implemented. Electoral promises to raise pensions and their increase is more of a momentary and emotional factor. Problems with Sodra remain. Meanwhile there were no promises to raise budget income even prior to the elections.

“There was much promised regarding the social sphere. Overall the programme is more oriented to not increasing the GDP pie as such, but to a more consistent and just distribution of it. There has been no or little talk of the overall economic situation, the business environment in Lithuania and what specific steps will be made to improve it. In my opinion there are many wishes to be seen right now, but no actions to see,” said Chief Economist for the Nordea bank in Lithuania Žygimantas Mauricas.
While during the electoral campaign the Farmer Greens promised to dedicate particularly much attention to culture, artists have instead been on the receiving end of higher taxation.

“Instead of the promised welfare, taxes have risen. The actions were masked by beautified phrases which were successfully taken up by the news media,” said Culture Council member Vaidas Jauniškis.

The chief editor to the Delfi.lt portal states that it will be excellent if the “Farmers” fulfil at least 10% of the promises they made.

“They lack expert knowledge, that’s one thing. Another thing is that it is a very varied crowd and there is a clearly visible separation between Karbauskis and Skvernelis’ entourage. Perhaps from the cabinet side there definitely is an intention to implement certain reforms, but I believe that in the future there will be great disputes in Seimas due to them. A clear indicator was the postal service reform. That they are unable to come to terms on such a simple thing, then I cannot imagine how we will reduce, for example, the number of beds in hospitals, how we will do any other reform at all,” M. Garbačiauskaitė-Budrienė said.

Political scientist Šarūnas Liekis also says that the Farmer and Greens group has experienced the rise of three paradigms – the conservative, the liberal and the social democrat. Thus the final renditions of passed legislation are unpredictable and significantly differ from their primary proposals made by, for example, party leaders who were seeking to adhere to party ideology and pledges made to voters. These contradictions may be particularly visible during the spring session. Šarūnas Liekis also observes a deepening chasm between Seimas and the cabinet. Tensions, particularly regarding values, can only increase in the future.

“The Seimas majority won the elections with a programme which was oriented toward the public good, things like free education, free healthcare. In other terms a country that takes care of its people. Now the government’s stance is more accountant-like. In other terms, saving money and that public good is irrelevant, what matters is achievability, even if a smaller, but more thrifty programme. Such a stance can lead to certain conflicts in the future,” Liekis said.

After such disagreements, a fracture of the “Farmer” Seimas group is possible, we can also end up seeing some ministers resigning. The real leadership of the largest Seimas group will be revealed then. How electoral promises will be made into legislation and reform, and finally implemented will depend greatly on who will become the leader.

“Farmer” leader’s actions have many similarities with Uspaskich found (1)