A historical event for Lithuania 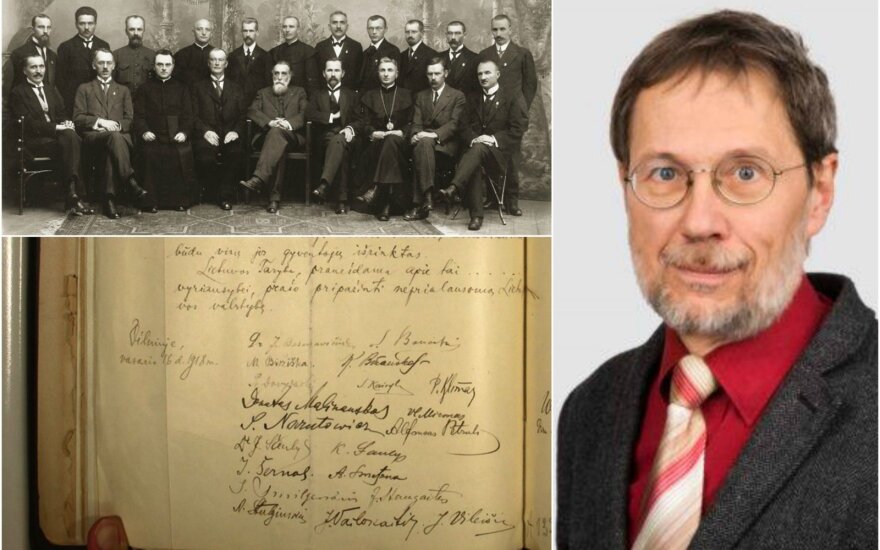 The original copy of Lithuania's Act of Independence of 1918, the signatories and Dr. Mažylis
© DELFI montažas

While professor Mažylis was barred from directly touching the document, he assures that based on what he has seen, the document, currently seen only by a member of archive staff and the professor himself, is without a doubt the original. He explains that he has seen seemingly identical transcripts in German and Lithuanian with the signatures of all 20 signatories, but they are clearly labelled as transcripts, meanwhile details such as ink and varying signature thickness serve to prove the document is genuine. The professor adds that the almost 100 year old document is well preserved.

Lithuanian ambassador in Berlin Deividas Matulionis has also inspected the document and the Lithuanian embassy is proceeding with negotiations over the return of the Act of Independence to Lithuania. The German archives have so far been extremely cooperative in their assistance to find the document and it is expected that there should be little trouble for the document to return.

It is believed that the Act was delivered to a representative of Germany in Vilnius on the afternoon of February 16 by signatory Jurgis Šaulys. The document was then sent by mail from Lithuania to Germany. The Act of Independence was signed on February 16, 1918 in Vilnius by the Council of Lithuania which was chaired by Jonas Basanavičius. Until now the locations of none of the original copies of the Act were known.

“Now Lithuanian diplomats will have a key role in the rest of the process and the Act’s location, but it is a very happy moment for all of Lithuania because the origin of its statehood and diplomacy has been found, which will allow further analysis for historians, scientists and political scientists,” professor L. Mažylis said.

According to historian Algimantas Kasparavičius the document, while massively important for Lithuania, did not have any special status in Germany, which should make the process of returning the historical document to Lithuania simpler. “Since 1918 Germany is the godmother of our independence and it remains such in the XXI century. In the end I believe that the German archivists will not create any great obstructions to returning the Act to Lithuania,” he said.

With the MG Baltic concern having promised a reward of a million euro for the discovery and return of the original Act of Independence to the state of Lithuania by no later than February 16, 2018, the president of MG Baltic Darius Mockus states that only half the task has been achieved and the reward will only be given when the Act is returned to Lithuania. Nevertheless his statement concludes with optimism, that the greatest miracle is that the document was found at all.

The president of MG Baltic says that the business group will keep its promise to pay a million euros...

President Dalia Grybauskaitė says that the discovery of what is believed to be an original copy of...

Vytautas Landsbergis , Lithuania's first post-independence leader, says that the discovery of what is...