100 Days. Karbauskis – down, Skvernelis – up, Butkevičius – to outer space 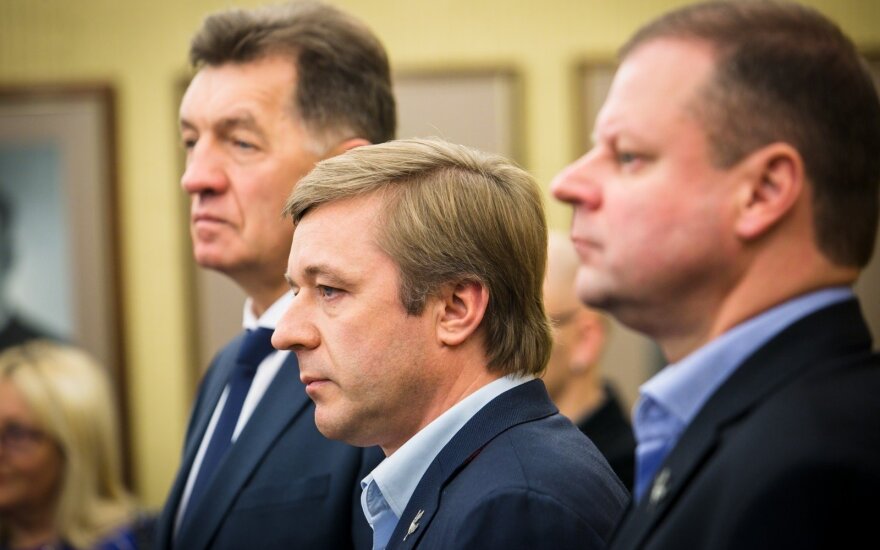 One has already wallowed a good amount in scandals, the other has voluntarily chosen to remain in the shadows, while the third has successfully manoeuvred through and is reigning at the top of the ratings. These are the different first months of the influential politicians back in government – Ramūnas Karbauskis, Algirdas Butkevičius and Saulius Skvernelis.

While Prime Minister Skvernelis entered power under R. Karbauskis’ “Farmer” banner, the two’s ratings have turned in opposite directions according to the most recent Spinter Tyrimai survey from the end of January.

Related articles
Landsbergis no longer needs the post of opposition leader, he has other plans
PM, conservative leader hold unannounced meeting at Government

While R. Karbauskis is trying to make sense of his own (un)declared wealth and the public with the media – his mysterious relationship with Greta Kildišienė, the Prime Minister has only occasionally contributed, but with principle and in good time. Meanwhile the junior coalition partner leader, A. Butkevičius of the Social Democrats has so far not been inclined to rock the “Farmer” boat during a time of crisis, considering that he sits in it himself.

Karbauskis tripped up by his business

Having constantly spoke of morals, fighting against the black market, corruption and alcoholism, “Farmer” leader R. Karbauskis entered government with a heroic halo, however it appears to be gradually fading. High value real estate in Spain and loans taken from the country’s banks have attracted attention from not only the news media, but also the opposition, who have contacted the State Tax Inspection (VMI), appealing for a review of whether R. Karbauskis is deceiving his voters.
The scandal of G. Kildišienė and the rented out SUV belonging to R. Karbauskis‘ Agrokoncernas added fuel to the fire, just as did rumours of the two politicians being linked by more than party affiliation.

In evaluating the “Farmer” leader’s first one hundred days in power, public relations expert Arijus Katauskas did not sugar-coat his words.

“Of the one hundred days in government, some 30 days we spoke about R. Karbauskis and we spoke about him from a negative perspective,” the public relations agency Nova Media communications specialist said, stressing that R. Karbauskis is the only of the majority leaders to be embroiled into scandal already.

A. Katauskas also pointed out Karbauskis’ poor communications and his conflict with the media, which the expert notes significantly contributed to the falling ratings.

Katauskas’ words were echoed by VU TSPMI lecturer, political scientist Ainė Ramonaitė, who pointed out that R. Karbauskis was little known prior to the Seimas elections and opinions on him were fairly split.

“The main thing people knew of R. Karbauskis was his wealth. Some viewed it positively, some viewed it negatively. Thus the scandals linked to R. Karbauskis’ business strengthened the suspicions of those who had initial doubts,” Ramonaitė said.

While support for R. Karbauskis has clearly weakened, the political scientist believes that his ratings should no longer fall because people should likely forgive the “Farmer” leader due to an overall positive view of the new government.

Skvernelis – the good side of the “Farmer” party

While his companion R. Karbauskis has tripped up on the way, Prime Minister Skvernelis has been forging ahead with his head held high, enjoying rising ratings and increasing public support.
“Skvernelis looks like the “Farmer” party’s good side which is unrelated to controversial decisions, simply working routine government work, coordinating and not having made any specific mistakes over the past hundred days,” VDU professor Mindaugas Jurkynas evaluated the PM’s first hundred days in office.

S. Skvernelis also received high marks from communications expert A. Katauskas, who stated that in terms of communications, the Prime Minister was the one to perform best over the past hundred days.

“People have much trust in him and regardless of the fact that party leaders or prime ministers have high ratings after being elected, S. Skvernelis could be said to almost be the best received prime minister yet,” Katauskas said.

In reviewing the possibility that the Prime Minister is preparing to run for the post of president, experts are uninclined to make rushed predictions, however they do believe such a possibility is very real.

“S. Skvernelis’ current performance is a good platform for a continued political career, if he has the ambition for it. If presidential elections were to happen soon, then Skvernelis would have good chances, however much time has to pass still, there will still be many challenges,” M. Jurkynas commented on the PM’s chances to run for president.

Political scientist A. Ramonaitė does not, however believe that the post of president is what S. Skvernelis needs right now, given his high ratings and freedom of choice.

“The post of prime minister is, truth be told, the best in Lithuania – it allows you to act under the condition that you know what you want to do. It appears that S. Skvernelis is fairly resolved and this type of person is not someone who should aim for the post of president or a seat in the European Parliament. Unless circumstances change, with there being nothing else to do,” A. Ramonaitė mused.

According to her, it is interesting what the “Farmer” party’s fate will be, what direction it will take.
“Perhaps there will be an opportunity for Skvernelis to get involved in party management more. I can imagine him better in such a role and not in the seat of president or MEP,” the political scientist said.

With the Social Democrats being the coalition’s junior partner, A. Butkevičius has been almost invisible over the first few months of work in government. Doubts abound in the public sphere – is this the Social Democrat extinction from working with the “Farmers” that was predicted prior to the elections or is it a silent regrouping of the party. Experts view such silence from the party ambiguously, however they are in no rush to bury the party and recommend to wait for a new party leader, upon whom much will depend.

“While A. Butkevičius managed to keep the party in the majority, it is clear that he is not playing first fiddle. Butkevičius has all but vanished from the public sphere which is logical, he enjoyed attention during his term as PM, however he was not doing well there either lately,” public relations expert A. Katauskas said.

He stressed that the Social Democrat Party’s communication problems are deeply rooted. While there are potential leaders with good communications skills, there are also people who greatly harm the party’s reputation. Katauskas also pointed out that while the party’s withdrawal may appear as the most logical step on one hand, it is also an inability to attract attention on the other hand.
“Particularly now, when the talk of electing a new leader is proceeding, in my opinion the party’s low exposure can remain, but its potential leaders should communicate particularly actively instead,” A. Katauskas pointed out.

Political scientist A. Ramonaitė views the party’s current position as an interim, something echoed by VDU lecturer M. Jurkynas.

“A change in party leadership awaits with the party chairman election. I believe that this will decide what the party focuses on, what face it will choose,” M. Jurkynas stated.

Alfa.lt reminds that A. Butkevičius‘ successor will be elected in direct elections by LSDP members in spring.